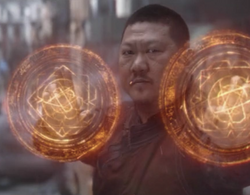 You may have a gift for the Mystic Arts, but you still much to learn.

Many of the details about Wong's past remain shrouded in mystery, as he does not like talking about himself. The most important thing to know about him is that when he discovered Kamar-Taj, he instantly dedicated his life to the Mystic Arts. He was one of the most gifted students ever to be trained by the Ancient One, moving up to become one of her most trusted lieutenants.

When Stephen Strange arrived at Kamar-Taj, Wong initially did not like him. He thought he was snarky and arrogant, and did not deserve to be there. However, after many months of training him, Wong and Strange came to understand each other, and even formed something of a friendship.

After the Ancient One was killed in battle against Baron Mordo and Dormammu, Wong agreed to stay by Strange's side as they set up shop in the New York City Sanctum.

It was then that Wong explained to Strange that the Eye of Agamotto contained the Time Stone, and it was the responsibility of the Masters of the Mystic Arts to protect it from falling into the wrong hands. Wong, Strange, and their ally from the Dark Dimension, Clea, would end up forming an alliance with the Avengers to better protect the Time Stone in an attempt to prevent the Prophecy of Infinity from coming true.

Retrieved from "https://marvelcomicsfanon.fandom.com/wiki/Arthur_Wong_(Earth-101)?oldid=249531"
Community content is available under CC-BY-SA unless otherwise noted.