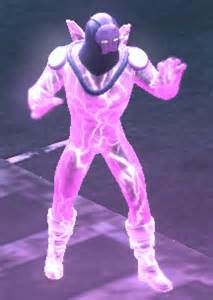 No Hair, (currently); Brown (as human)
Skin
Purple
Unusual Features
Made out of light.
Status
Citizenship

Little is known about the Living Laser's life before the Secret Invasion. It is assumed to be similar to his mainstream counterpart.

Laser, at some point, began hunting Skrulls across America. He discovered that Skrulls were setting up a base in a Roxxon facility. He also discovered they were taking mutants prisoners; including Storm & Sunfire of the X-Men, and Quicksilver from the Avengers. While raiding the base: Laser came across an Ultimate Alliance squad consisting of Spider-Man, the Sandman, Daredevil, and Wolverine. He explained the situation, and helped the squad rescue the captured mutants.

The UA receives intelligence on a Maggia operation in downtown Manhattan. The intel itself was gathered by symbiote superhero Toxin. However, unlike last time, Toxin has managed to escape and a UA squad (Laser, his longtime enemy Iron Man, Storm, and Thor) is sent to help. Arriving to the Maggia op's location, the squad fights its way through the Maggia forces. Back up arrives in the form of a New York Police Department patrol lead by Stan Crater & Jean DeWolff. But the Maggia sends in Shockwave & Force are sent in. Fortune smiles when a Sinister Six member stumbles across the fiasco of gunfire, Electro. The battle ends with UA confiscating several of the crates of weapons being loaded onto trucks, the Maggia escape with the rest. What's inside is the twist, the crates contained the weapons in the S.H.I.E.L.D. transports a few weeks back; meaning, of course, the Maggia have been infiltrated by the Skrulls as well (Shockwave & Force also were Skrulls).

8 weeks after the fiesta in Manhattan, the UA tracks down the weapon shipments organized by the Skrulls to the San Diego Zoo. Laser, Storm, Iceman, and reformed Iron Man villain Crimson Dynamo arrive at midnight. Backed up by X-Man Cyclops, the five are met with strong resistance. The team are once again confronted by Venom, the symbiote having detected someone in the vicinity, but he is once again defeated. During that debacle, Eddie Brock observes the heroes leave at a safe distance. The squad discover a secret bunker under the zoo, created by the Skrulls. Plowing through security, they discover supervillain team, the Ani-Men, stealing data about the Skrulls. During the resulting battle, the Ani-Men are forced to retreat at the arrival of another Sinister Six member: the Lizard; who sent as a reinforcement by their leader Doctor Octopus. The six superhumans make their way into a weapon creation lab, run by Skrullian assassin & scientist X'iv. Not ready for their arrival, he is forced to release mind-controlled supervillain Iguana upon them. While Iguana is defeated: X'iv manages to evacuate the lab, with the team pondering how the Ani-Men knew about the Secret Invasion. Back at the base, Stegron is waiting. The dinosaur man at first didn't want to be involved in the Secret Invasion; but changed his mind out of a desperate need of a cure.

Retrieved from "https://marvelcomicsfanon.fandom.com/wiki/Arthur_Parks_(Earth-6109.2)?oldid=183815"
Community content is available under CC-BY-SA unless otherwise noted.