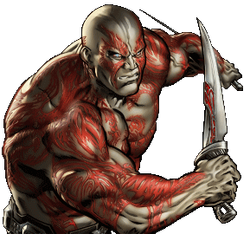 Nothing goes over my head. My reflexes are too fast. I would catch it.

Real estate agent Arthur Douglas, his wife Yvette, and daughter Heather, were driving across the Mojave Desert from Las Vegas to Los Angeles when a spaceship carrying the mad Titan named Thanos passed overhead on a surveillance mission to Earth. Wishing to keep his existence a secret, Thanos destroyed the automobile in case its passengers had seen his ship, and then landed to make certain they were dead. Satisfied that they were, Thanos left. Unknown to the Titan, his father Mentor had been monitoring his activities on Earth to examine his son's latest handiwork. Mentor discovered that Heather Douglas was still alive, and took her back to Titan to be raised. She later returned to Earth as Moondragon.

Mentor determined that the threat of his son Thanos could no longer be ignored and wanted to create a being of sufficient power to defeat Thanos. Enlisting the aid of his father Kronos, who millennia before had become a discorporate wraith, Mentor had Kronos seize the astral form (living consciousness) of Arthur Douglas before it had completely fled from Douglas's body. Kronos and Mentor then fashioned a humanoid body from the Earth's soil, granted it superhuman powers, and cast Douglas' spirit inside it. Thus they created the being who would become known as Drax the Destroyer.

Mentor instilled in him monomaniacal hate for Thanos. Drax set out on a rampage across the universe in a search for vengeance, but was eventually captured by the Nova Corps and imprisoned at the Kyln.

While locked up in the Kyln Drax attempted to kill Gamora. He was stopped by Peter Quill, who convinced him that Gamora wanted to kill Thanos as well, and that Quill along with Rocket and Groot were on the same mission. Drax aided them in their escape, and set out on the quest to deliver the Orb of Morag to the Collector.

While at Knowhere, he got into a scuffle with Rocket after a bit of gambling, forcing the other fugitives to intervene, and then caused further problems when he sent a challenge to Ronan to confront him on Knowhere. In the resulting battle, Drax tried to engage Ronan in a personal fight, but was casually swatted away. Eventually he was thrown into a tank of yellow liquid and left to drown, but for the intervention of Groot who hoisted him out and injected air into his lungs. Chagrined at how his actions had caused so much harm to the group, Drax readily accepted a new mission to rescue Quill and Gamora who had been captured by Ravagers while Drax was distracted with Ronan. Drax and the others launched a daring rescue with the Milano facing off against the vastly superior power of the Ravager ship, which culminated in a fragile truce when Quill convinced the Ravagers to work with them.

After reuniting with their comrades on the Ravager ship, they devised a plan to stop Ronan from destroying Xandar. Drax accompanied Quill, Groot, and Gamora in infiltrating Ronan's ship. Drax along with Gamora, Quill, and Rocket, were saved from the crash by Groot using his own body as a cocoon to shield them from the dangerous fall, seemingly sacrificing himself in the act. After this, Drax comforted Rocket by petting him on the head like a pet. When Quill used the Infinity Stone inside the Orb to defeat Ronan, he along with Rocket and Gamora, physically linked arms to help carry the burden of the Orb's destructive energy. After the battle, he joined the other Guardians on their rebuilt ship and set forth on a new adventure.

Retrieved from "https://marvelcomicsfanon.fandom.com/wiki/Arthur_Douglas_(Earth-1010)?oldid=182725"
Community content is available under CC-BY-SA unless otherwise noted.