Arrows is the third episode of Marvel's Young Avengers.

-The Scarlet Witch and Quicksilver… They’ve gone missing. - Patriot looked up at his friends, clearly worried.

-The disappearance is… Pretty much magical. - J.A.R.V.I.S. informed.

-They… They took my grandfather. - Eli whispered.

-Avengers… They took Steve… I repeat, they took Captain America. This is a code red alert. - Natasha Romanoff spoke through her intercommunicator.

-Who hired you? - The Black Widow asked, holding Blackwing by his forehead.

-But you’re a sh*tty criminal, and men like you LOVE money. -

Natasha pushed Manfredi’s head against the metal table and then looked at him sternly. -It was no coincidence that you, the Living Laser and the Swordsman attacked Brooklyn at the same time. -

-Who sent you to kidnap Quicksilver, the Scarlet Witch, Isaiah Bradley and Captain America? -

-Kidnap them? - Joseph shook his head. -I didn’t kidnap anyone. -

-You better tell me now or I make sure you leave this room as blind as a bat. -

-I did not do it, b*tch. - Manfredi spat and then looked into the Black Widow’s eyes. -I dare you to kill me. -

-Do you really think I’m not capable of that? - Natasha shook her head. -I am capable… But I’m not that kind of person anymore. - She turned around and headed towards the door.

-I’m just more human. - She replied without looking back and closed the door behind her.

-You didn’t kill him, did you? - Patriot asked the Avenger as she got out of the interrogation room.

-He didn’t reveal anything, did he? - Kate Bishop asked, sitting on the couch.

-Are you crazy?! - Bradley exclaimed, shaking his head.

-No, I’m not. - Black Widow replied, inexpressively. -They were definitely up to no good… But I don’t think they kidnapped our friends. -

-Then who did?! We’re back to square one! - Patriot closed his eyes.

-We will find them, Eli. - Nat looked down at the Super-Soldier and walked out of the room.

Billy couldn’t sleep that night. He kept tossing and turning, while Teddy slept peacefully beside him. Standing up, he walked down to the main hall, yawning. Suddenly, he saw a shadow leaving the Mansion, cloaked by the darkness of the night. Wiccan didn’t bother to get properly dressed and ran after the figure as fast as he could, wearing just a white tee and sweatpants. The mysterious person climbed to the rooftop of a nearby building, their long hair perfectly defined thanks to the blowing wind. Bending down and sliding his hands down his thighs, Billy stopped himself, recognizing the figure.

Wiccan ran back inside the Mansion and opened Kate’s room door slowly. A radio was on, carelessly thrown on the white sheets of the bed.

-Reinforcements needed against Bullseye… - Sergeant Mahoney said through the police radio. -Repeat, we need as many officers as possible in West 39th Street and 9th Ave. -

Billy got in his Wiccan costume and flew away to Hell’s Kitchen, in order to aid his teammate.

-Oh, the Hawkeye Girl! - Dark Hawkeye exclaimed, smirking evilly at the Young Avenger from a rooftop.

-I rather be a girl than a fake. - Kate shrugged.

-Ugh, feminism. - Lester rolled his eyes. -Ok, I’m done talking to you. - He pulled an arrow out of his quiver and fired it at the female archer. She rolled on the floor and immediately after fired a tranq arrow at the Dark Avenger. As the poison that emanated from the arrow started to get into Bullseye’s body, he growled at the teenager and jumped down from the rooftop. Then, the villain grabbed a police officer and tossed it at the Young Avenger, who jumped and caught him in midair.

-Move away! - Kate ordered, before shooting an explosive arrow at the police cars behind Dark Hawkeye. The car exploded, pushing everyone around it away.

When Kate opened her eyes, Lester was already walking towards her, ready to kill her. The Young Avenger got a putty arrow out of her quiver and set it off manually, before tossing it under Bullseye’s feet. As the arrow set off, the Dark Avenger was slowed, giving Bishop time to get back up.

-You definitely should be. -

-That’s just so pathetic! - Lester chuckled. -Now, if you were at least a good archer like the real Hawkeye… -

-I don’t care about living up to a codename, kiddo. - The villain shook his head. -I have already proved my worth as Bullseye. This Dark Hawkeye name is Rusk’s thing. -

-Look, I couldn’t care less about codenames. I just wanna know if you and your pathetic team are involved in the disappearances. -

-You already did. - Kate rolled her eyes.

-Billy, what are you doing here?! - Bishop asked, turning around.

-I saw you leaving… - Wiccan muttered breathlessly. -KATE! WATCH OUT! - Billy screamed, firing a lightning bolt at Bullseye, who was about to attack the female archer.

Hulkling woke up and didn’t see his boyfriend beside him. -Ugh, Billy, what have you gotten yourself into now? -

The Kree/Skrull hybrid gathered his teammates in his and Billy’s room. -Both Billy and Kate are missing… I don’t think this is a coincidence. -

-Neither do I. - Patriot shook his head.

-I don’t think he asked you. - Speed rolled his eyes.

-Guys, focus. - Cassie looked at the two teenagers, who looked down in shame. -I suggest we look for clues around the house. -

-I think these two left us to play hero on their own. -

Lester took a couple steps backwards and pulled two arrows from his quiver before firing them at the Young Avengers. Kate jumped and hit both arrows with her quiver, tossing them back away. The female archer then ran towards the Dark Avenger and used her martial arts knowledge against the assassin, who fought back with the ninja training he received from The Hand. As Wiccan flew towards the two, a rainbow ray absorbed him, teleporting him out of Earth. 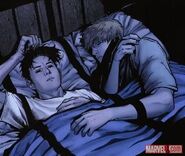 Retrieved from "https://marvelcomicsfanon.fandom.com/wiki/Arrows_(YA)?oldid=149433"
Community content is available under CC-BY-SA unless otherwise noted.