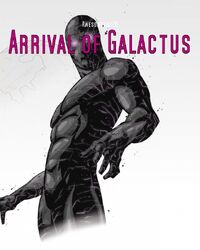 Fury orders that Tony Stark, Hank Pym and Bruce Banner that they work on a way of stopping him, Reed would also help the three. With the four smartest men on the planet working on a way to stop Galactus, S.H.I.E.L.D. bring in Cable and Silver Surfer. Upon arriving to the Triskelion Cable attacks Silver Surfer for all the horrendous things he'd do in the future, the two engage in a fight that almost destroys the Triskelion, the Silver Surfer ends the fight with his foot on Cable's throat and explains to him that he apologizes for the horrible things he's done and regrets them, but he did it for his planet. Cable reluctantly forgives Silver Surfer and the two come to an understanding.

While on a date in Manhattan, Peter Parker and Mary Jane Watson see Galactus' towering figure over New York. Peter informs MJ that he has to go to which she agrees and tells him to be safe. Spider-Man makes his way to Galactus, seeing as he has no chance in stopping him he begins saving citizens from collateral damage caused by Galactus. Suddenly he sees a car about to fall off the Queensborough Bridge, he grabs it but struggles to pull the car as he is about to lose his grip Daredevil enters and saves all the people inside the car. Spider-Man and Daredevil look into the sky and wonder how on Earth they'll defeat Galactus, Daredevil says all they can do now is help the people and let the big guns handle it.

The Avengers, Fantastic Four and X-Men arrive and attack Galactus. Hulk, Thor and the Thing are the heaviest hitters and causing the most damage to Galactus until he blasts them with cosmic energy causing Hulk to revert into Banner and Thor and the Thing to be knocked unconscious. Without their heavy hitters the three teams are decimated by Galactus' powers. As Galactus is about to kill the three teams, Sue Storm protects them with a psionic shield bubble. Silver Surfer and Cable arrive to help, while Cable is quickly knocked out. Silver Surfer gives Galactus a run for his money, realizing he can't defeat Galactus alone, Silver Surfer retreats and uses an untapped power the allows him to teleport himself, the other superheroes (including Spider-Man and Daredevil) back to the Triskelion.

A few days after Galactus' attack, New York begins rebuilding their wartorn city as well as the Triskelion. A statue of Silver Surfer and Cable would be erected in their honor.

Retrieved from "https://marvelcomicsfanon.fandom.com/wiki/Arrival_of_Galactus?oldid=189067"
Community content is available under CC-BY-SA unless otherwise noted.