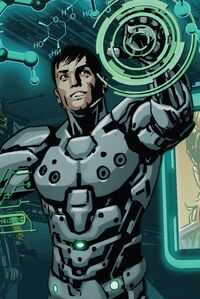 Arno Stark and his younger twin brother, Tony were children of renowned industrialist Howard Stark Jr. and his wife Maria, as well as the grandson of Howard Stark Sr., one of the men responsible for the creation of Captain America. So the two were born with a lot of expectations and a lot to live up to.

At an early age, Arno displayed genius level intellect similar to his grandfather, father and brother. At the age of six, he built his first engine from scraps.

At the age of seventeen, like his brother, Arno graduated MIT. Growing up, Arno was more reserved and liked to focus on creating new inventions while his younger brother preferred to party and live a playboy lifestyle.

At nineteen, Arno's father stepped down as CEO and appointed Tony as the new CEO. The reason for this was that he wanted Tony to learn humility and responsibility through running a company and had faith in Arno to build his own legacy.

Feeling betrayed, Arno and Tony's relationship was strained as well as with his father's. Arno cut ties with the Stark family and used his own genius to fund his own company.

When Arno managed to deduce his brother was the famous superhero known as Iron Man, Arno saw this as an opportunity to rid himself of Tony, get revenge and become the CEO of Stark Industries as he believed it was his birthright. Arno created an armor-like suit similar to Iron Man but 10 times more powerful and durable.

Titanium Man attacked a Stark Expo event that Tony was attending, Tony quickly armored up and went to battle him. After a long battle that tore up half of Manhattan, Iron Man defeated Titanium Man and learned that it was Arno by unmasking him, angered by this Tony was tempted to end Arno right there and then but learning what it means to be a true superhero during his adventures as Iron Man, Tony arrested Arno instead and sent him to the Triskelion's maximum security prison.

Arno would swear revenge on Tony and declared himself his own brother's most dangerous nemesis.

Without his armor Arno Stark possesses the normal strength of a normal human man his age, height, and build who engages in moderate regular exercise. The armor magnifies Stark's strength to superhuman levels, being able to lift up to 150 tons.

Retrieved from "https://marvelcomicsfanon.fandom.com/wiki/Arno_Stark_(Earth-1111)?oldid=189064"
Community content is available under CC-BY-SA unless otherwise noted.