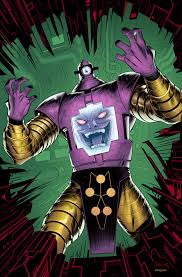 No Hair, formerly Brown
Unusual Features
Zola has an ESP Box instead of a head. A three-dimensional hologram of his original face appears in a view-screen on his chest. The ESP Box enables Zola to see and hear by psychic means, as well as to control his genetic creations telepathically.
Status
Citizenship

Scientist Arnim Zola became one of the first biochemists in history after finding notes and equipment belonging to the offshoot race of humanity, the Deviants. He learned many things from his studies, including the ability to transfer people's essence into clones of their original bodies. He was one of Cap's main villains in the 1940's. He often worked alongside Red Skull during this time.

Retrieved from "https://marvelcomicsfanon.fandom.com/wiki/Arnim_Zola_(Earth-6160)?oldid=262845"
Community content is available under CC-BY-SA unless otherwise noted.