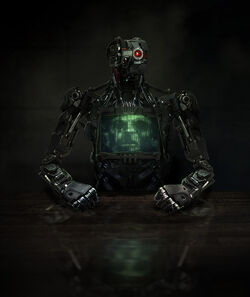 The Brain of Hydra
Identity

Oh my poor misguided Captain... look around you! I have never been more alive!

Arnim Zola was a gifted scientist who was recruited to work for Hydra, directly under the Red Skull during World War 2. He became dedicated to Hydra's cause and helped the fight against Captain America and the Howling Commandos until he was captured and imprisoned by the SSR.

After the Red Skull apparently died and the war was ended, Arnim Zola was recruited by the new organization S.H.I.E.L.D. to act as a scientist and redeem himself. However, Zola used this opportunity to begin scheming and start to rebuild Hydra from within S.H.I.E.L.D. He eventually grew ill with cancer, but refused to let it be the end of him.

Zola transferred his consciousness into an advanced computer system, allowing his physical body to die and for S.H.I.E.L.D. to be believe him gone. He was then free to operate from the shadows to help Hydra, and even formulated an algorithm that evaluates peoples past to predict their future in order to determine who might be a threat to Hydra.

He was eventually discovered by Captain America and the Black Widow, who learned that he had been based out of the former S.H.I.E.L.D. stronghold, Fort Lehigh. They confronted him for information, but Zola was now willing to sacrifice himself to kill them, and summoned an airstrike to destroy the base. Unfortunately, both of the Avengers survived, and Zola was lost forever.

Retrieved from "https://marvelcomicsfanon.fandom.com/wiki/Arnim_Zola_(Earth-101)?oldid=250252"
Community content is available under CC-BY-SA unless otherwise noted.