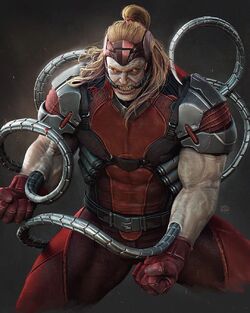 It has been too long comrade. Let us... make up for lost time.

Arkady Rossovich was a high level Russian assassin working for the KGB, who made good use of his mutant strength and durability. However, he was eventually approached by a man named William Stryker, who offered him the chance to further enhance himself and work on a much grander scale. Rossovich agreed and was enlisted into the Weapon X Program, where he was injected with a sample of Adamantium, activating his secondary mutation, causing him to sprout tendrils from his wrists that were capable of draining another living being's life force.

Becoming Omega Red, he quickly became one of the deadliest men in the entire world. He often worked alongside the likes of Wolverine and Sabretooth, despite hating both of them immensely. Red was pleased when Wolverine abandoned Weapon X, but enraged when he returned to dismantle the entire organization.

Omega Red wanted revenge, and his anger was exploited by Magneto, who recruited Red into the Brotherhood of Mutants. He never particularly cared for Magneto's mission, but was happy to carry out whatever dirty work he needed, especially if it was against the X-Force.

After the decimation of Genosha, Magneto began to grow more and more desperate for victory. Omega Red and several other members of the Brotherhood would go on to stage a raid on the X-Force's home base of Krakoa, but things went south quickly. Omega Red found himself engaged in battle with Wolverine, and the two were fairly evenly matched, until Omega Red was able to get a good hold on him and start to drain out his life force. He was mere moments away from success, but was then blindsided by an attack from Storm, who called on a massive lightning strike to completely fry Omega Red, killing him and saving Wolverine's life.

Retrieved from "https://marvelcomicsfanon.fandom.com/wiki/Arkady_Rossovich_(Earth-101)?oldid=250487"
Community content is available under CC-BY-SA unless otherwise noted.