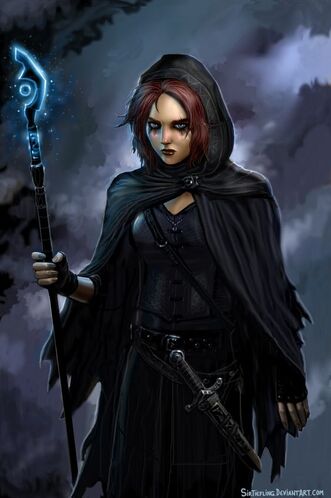 Born in Tintagil Castle, her mother and father loved her. Being the only child at the time, she was taught some magic by her father. Her father then left and didn't come back so Aria and Morgan thought he died. Morgan then had Sir Ewain. Aria was 7 at the time and told legends to her younger brother, she enjoyed his being there.

When she turned 15, she visited her Blackwood family side for a few weeks and there was a witch trail commencing. She barely escaped, but Aiken, Corliss, Hope, Blake, and Aedomous Blackwood were killed. She was traumatized and witnessed it all. Her paternal family was hated almost everywhere in England. She then fled to a different village. She was found by Chthon and he showed interest towards her, making her the pupil of Chthon.

When Chthon was teaching Aria magic, they heard a loud crowd and Aria almost fled, but Chthon whispered a chant in her ear and told her to use it when they came. They came and threw their torches at her. She then said the chant and a huge beam of darkness hit the peasants and they were all turned to ash.

She returned to her family when she was much older, and Morgan was surprised to see her but told her that Ewain died. Aria was extremely sad, especially because she didn't get to see Ewain become who he was before he died. On multiple occasions, she communicated with his spirit. A new legion of villagers showed up shortly thereafter and surrounded her. They tied her up, put her feet in cement and threw her into the ocean. She drowned, nobody could hear or save her.

But when this happened, the sky turned blood red and Chthonic demons rampaged everywhere. The villagers thought it was the work of a new Blackwood, but it was actually Aria's work. Aria's physical body drowned but her spirit was angered. She burned an eighth of England but then stopped, everything went back to the way it was before, as if none of it really ever happened. She was reanimated and was found by her mother. They decided to flee England.

She was fighting demons off in hell at the time and decided to go back to her mother. She then went back to earth and saw that she had two new siblings, Caroline and Winchester. She decided to teach Winchester some magic and he got every spell right. It surprised her, and she was reminded of Ewain. She noticed a rich figure call for Winchester and Winchester introduced Victor to Aria.

She later felt something bad was going to happen, and something bad did happen. Her mother summoned an army of demons to attack Earth. But for a moment when Ares killed Morgan, she was angered and blast Ares in the heart and he was turned to dust. She then reformed him and went away. She trained in magic, and Morgan returned. Morgan then attempted to stab Aria, but she countered it with a blinding spell. She then threw Morgan out of a window and blasted her away. That wasn't the end of Morgan though. She formed a team of heroes capable of stopping Morgan le Fay and put an end to Morgan's chaos. She faced Morgan without the team of heroes and put an omen on Morgan's magic so that if she casted a spell, it would hurt her. But this only lasted for a while.

She was buying some witchcraft items from a store, but then she noticed a robbery. The person saw her and shot her. The bullet bounced off of a force field that she didn't make. Doctor Strange appeared and blasted the man. The robber teleported the money bags away and blasted Doctor strange with his own magic. Aria decided to help Stephen so she used a spell to bind the robber. She made him teleport the money bags back to the place he got it from and she left him there. She teleported away. Doctor Strange then recognized her as Aria Blackwood, the daughter of two of the most powerful Magic users. He thought she died ages ago. He then decided to show her that Eric Blackwood was actually still alive. Eric looked everywhere for his daughter and finally found her. Aria was both happy and mad. She hugged Eric, but then slapped him, angry that he abandoned her and Morgan. Now, Doctor Strange, Clea, and Aria work together to stop threats to the universe.

Aria has very high level magic. As the pupil of Chthon, she knows very powerful spells. She could use her powers to manipulate multiple mystic forces. She could cast spells capable of destroying universes.

Semi-Immortality: She has immunity to aging and can't die by age.

She is very vulnerable to Higher level magic and Iron or Ferrous Metallic Objects.

Equipment: Staff of Void: She has this staff that could increase her magic abilities and can cast countless spells, along with creating her own spells
Transportation: She can teleport through dimensions and universes, she can also fly using her magic
Weapons: Spell books, Staff of Void, and a mini blade

Retrieved from "https://marvelcomicsfanon.fandom.com/wiki/Aria_Blackwood_(Earth-616)?oldid=224917"
Community content is available under CC-BY-SA unless otherwise noted.