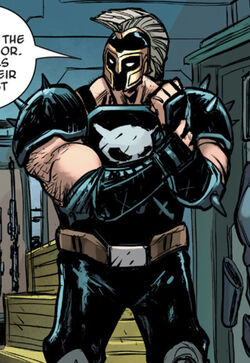 The God of War
Identity

Yes! Give me your bloodshed!

Ares is the Olympian God of War, who has always had an ax to grind with the Asgardian God of Thunder, Thor. That's why when he was offered membership into the Order of the World Tree, he did not hesitate to agree.

Ares was one of the leading forces on the Siege of Midgard, and he was even successful in slicing off Thor's arm, as well as killing the heroes known as Rogue, Havok, and the Punisher.

Since the Order of the World Tree merged the Nine Realms and seized control of the home planet, Ares became the new self-declared King of Midgard. The majority of humanity that was not able to escape to Latveria's extradimensional barrier, live as Ares's slaves.

Eventually, Ares met his end during an assault on his kingdom in Australia by the Avengers. Engaging in battle primarily with Captain America and Lady Sif, he was left open to decapitation by Doctor Strange, who closed a portal around his neck, stranding his head in Limbo.

Retrieved from "https://marvelcomicsfanon.fandom.com/wiki/Ares_(Earth-2001)?oldid=262362"
Community content is available under CC-BY-SA unless otherwise noted.