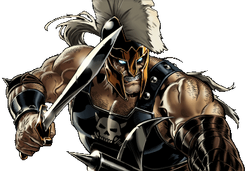 Married
Occupation
Olympian God of War, adventurer, former construction worker.
Origin
Origin
Ares is one of the Olympians, an extra-dimensional race of beings once worshiped as gods by the people of Ancient Greece and the Roman Empire.
Place of Birth
Olympus
First appearance
The Call

The chain of command. Rules of engagement. This Geneva Convention thing. Medical evac. Supply lines. The white flag. The Red Cross. Worrying about evacuees and refugees. Taking prisoners. Losing the battle but winning the war. Cursed diplomats. The proper standard of grooming. Sensible things like having enough bullets before you go into battle. That's the dung my sister cares about. I'm the other God of War.

The son of Zeus and Hera, Ares was worshiped as the god of war in ancient Greece and Rome. Ares' dissatisfaction with Zeus' rule of Olympus began after Zeus' decree that worship of the Olympians should be allowed to die out.

On three times he attempted to conquer Olympus, twice in league with his uncle Hades, god of the Olympian underworld, but each time he has been thwarted through the efforts of his half-brother, Hercules, and Hercules' allies. Ares has hated Hercules ever since he had killed Ares' monstrous Stymphalian birds in the days of ancient Greece.

Like many Olympians, Ares accepted the rule of Aphrodite during an apparent leave of absence from Zeus. Olympus was relocated to the planet Venus and most of the Olympians adopted their Roman names. Ares, taking up the name Mars during the time. In 1949, Mars was among the various Olympians gathered by Aphrodite (now calling herself Venus) as potential subjects to make her mortal lover Whitney Hammond jealous. In the end Samson was chosen over the others{. In 1951, Mars was summoned by Jupiter to assist Venus along with the Asgardian thunder god Thor to assist Venus in defending New York City from the insane inventor John Dark and his mechanized army. Mars attempted to appeal to the pride Dark felt when he previously served in the United States Army, but this did not succeed and Thor was forced to slay Dark. After this Ares resumed using his Grecian name and withdrew from interacting with the mortal world once again.

In recent years, Ares tried to set two of Earth's nations at war with each other. The conflict threatened to spread over all of the Earth, until Ares was forced to put an end to it by his half-sister Venus, whom he has long sought in marriage, and the hero known as the Sub-Mariner. Venus and the Sub-Mariner extracted a pledge from Ares not to engage in further warmongering on Earth.

This has not stopped Ares from joining with Hera in order to torment Hercules personally.