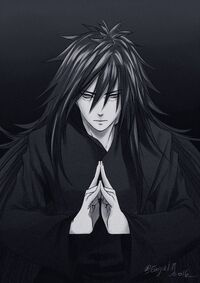 Arashi was the son of a renowned kunoichi of the Iga Shinobi clan in Japan and the Shinto Storm God Susano'o. At this era of Japan's history in the modern world, the age of the Ninja was slowly coming to an end, with the only two clans remaining being the Iga and the Koka Clan. Everyone in the clan treated Arashi like what he was, a demigod. But they were humble, and brought him up as a person and not a king that needed to be spoiled. With Arashinami in their ranks, the Iga clan could once again rise to prominence and maybe even make a comeback in today's world. However, much like his father, Arashinami was a troublemaker and acted much like his father who defined as a trickster. He snuck out at night, played pranks, and defied orders to remain within the dojo. It only got worse when his powers of shape-shifting manifested. Verbal passwords were required in order to identify Arashinami and prevent him from leaving.

It is not that the Iga dislike him, but due to the fact that he is a literal demigod and people may try to kidnap him and use him for their own nefarious purposes, that he must be locked away. Which was a very basic was of looking at things, and it takes away form that fact that Arashinami, while a demigod, was human as well. And thus Arashinami's early years were void and full of loneliness.

Soon it became time for him to begin training, and that was where the fun began. It turned out that Arashinami inherited Susano'o's affinity for combat. However, he was reckless and was often beaten by skilled masters who stayed a step ahead of him. The defeats infuriated the young demigod, but nonetheless, he managed to calm down shortly afterwards however the problem still remained. He was still arrogant when it came to combat and had a god complex when lectured about it. He was arrogant and thinking he could beat anyone, sensing his arrogance from the heavens his father Susano'o decides the time isn't right to tutor him.

His clan sensed this as well and decided instead to send him away on a two month-long journey to the forests of Iga. During this time, he encountered a foe more skilled than him in fighting, who could easily spot him when he tried to blend into the surroundings.

Arashinami was beaten by this enemy for two weeks straight before giving up in frustration and setting up camp far away from the location of his opponent. He spent two more weeks meditating and finding his inner peace. During this time he reviewed his entire series of fights with this opponent and came to one crippling conclusion. The problem lay within himself, he was too arrogant, and knowing this, he spent another few weeks trying to get some sense of patience and to downplay his arrogance.

During the second week of the second month, he emerged, and while his patience had improved, it wasn't quite there yet. He did, however, learn to control his arrogance and went to meet his foe again, engaging him in combat and finally besting him. After defeating his foe, he decided to head back to his clan as he felt that he was ready. But h paused and changed his mind, instead choosing to spend more time in the forest honing his patience by meditating and doing tasks that require patience, such as fishing. After the second month had come to a close, he headed back to the Iga clan, much more patient and much less arrogant. He still needed to work on his patience, as he tended to lose his cool more often then he liked to admit.

Once he returned to the clan, he was assigned a mission to see the results of his training. The Iga police had hired them to stop a riot that had been getting increasingly violent and so Arashinami was sent to quell the riot. Arashi did just that, and used the power of his words to stop them and convince them to stand down. Both Susano'o and the clan were impressed with this, and on his birthday, Susano'o himself came during the hours of night and offered his son the choice for the former to become his tutor and inform him of his powers.

Not wanting to turn down such a request, he accepts and departs in the morning after informing the clan elders. Arashi then trained with his father for five years. He tried to understand and master all of his inherited powers, which included power over water, divine weather manipulation and lightning.

The water was easy to master, as Arashi was able to master it within a year. The lightning was a bit more complicated and took two years to master. The tricky bit was the divine weather manipulation, which he was unable to completely master even in the present day, although he has reached the point where he can cover his tracks with it by summoning a downpour over a small district.

After his fifth year of training, Susano'o sent Arashinami on a quest to defeat, gather and assemble the pieces of the Totsuka blade. Agreeing to this, Arashi embarked on his quest. He ended up defeating all of the goddesses and assembled the sword. This quest also served as a trial of patience. And thus, with his arrogance and patience under control, Arashinami became the Shinobi he was destined to be. However, despite all of this he does have a flaw in himself: he's aimless and he doesn't really have a direction he wants to go. And as of now he thinks that only purpose to be whatever he's told to be, i.e. an assassin, a spy, etc.

He has never really thought of himself of anything other than a shinobi and never really gave much thought of himself as a person. He also never actually had any sort of friend to speak of, causing him to be lonely and unsure of how to socialize with others. And so when he met Asami for the first time, he wasn't really sure what to say since he never really had someone like that before in his life. Aside from his dad and his clan, he didn't really know how to react to others .

Has relatively low chakra levels. Because he is part mortal, he cannot fully make use of his more advanced powers without it presenting a threat to his well being.

And thus, he need his sword i.e. the Totsuka blade in order to compensate for this as the blade, which is made up of 3 goddesses constantly refill his chakra. Allowing him to use advanced techniques and still carry on without suffering the consequences

Retrieved from "https://marvelcomicsfanon.fandom.com/wiki/Arashinami_Iga_(Earth-2977)?oldid=232623"
Community content is available under CC-BY-SA unless otherwise noted.