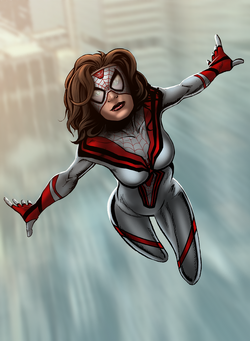 Earth-16
Base Of Operations
The Nexus
Characteristics
Gender

With great power comes a whole lot of fun when you're not too busy doing your job.

After the vigilante known as Spider-Man lost his aunt to the supervillain, Morlun, he wound up joining forces with S.H.I.E.L.D. to defeat him. From there, Spider-Man became one of their special agents, and started working closely with Mockingbird, eventually falling in love and getting married. It wasn't long until their daughter, April, was born. However, in a tragic reflection to her own father's experiences, when she was 4-years-old, they were both assassinated by the Hydra agent known as the Grim Reaper.

April was then bequeathed into the care of her godparents, Peter and Bobbi's closest friends, fellow S.H.I.E.L.D. Agents Hawkeye and Black Widow. Not wanting April to grow up seeking revenge, they dedicated the entirety of their career as S.H.I.E.L.D. agents to hunting down the Grim Reaper and bringing him to justice. However, from then on, he completely disappeared, and remained off of S.H.I.E.L.D.'s radar for the next 17 years.

When April was fifteen, she began to develop powers identical to those of her father. Afraid that this would happen one day, Hawkeye and Widow agreed it would be best to train April how to properly use her powers to avoid her accidentally hurting someone or herself. However, they made it very clear that they did not want her getting involved in their life as heroes. She, of course, completely ignored this. She snuck into the Triskelion and talked with Nick Fury, who she knew as "Uncle Nick", who encouraged her to follow in her parents's footsteps and become a hero. She was then able to use S.H.I.E.L.D. resources to develop a costume for herself and become a vigilante.

Hawkeye and Black Widow became enraged, and demanded she stop. However, Spider-Girl had already become a hot topic in the public. She decided instead to enroll in the S.H.I.E.L.D. Academy, becoming the first agent to ever study Operations and Sci-Tech at the same time. She graduated in record time, and was awarded with an official S.H.I.E.L.D. badge and granted the authority to act as a hero.

Eventually, Spider-Girl became a very famous hero, and her parents came to admit that they were proud of her. Over time, Spider-Girl began to amass a rogues gallery to rival her father's, including the original Doctor Octopus, who implanted his consciousness into a robot to live after his body died of cancer, an employee of Oscorp who discovered Norman Osborn's Oz formula and became the new Green Goblin, as well as a few new faces including the parasitic Vampyr, the mentally imbalanced imp from another dimension with an unhealthy obsession with Spider-Girl named Annataz, and even her ex-boyfriend, Vic, who raided the Tinkerer's old workshop to become the maniacal Technovore. But none of them ever compared to Venom.

Venom was Patrick Parker, Peter's estranged brother and the Uncle that April never knew she had. After her first encounter with Venom, she discovered the truth and attempted to reach out to him, only to discover that years of isolation with nothing but an alien symbiote for company drove him to sociopathy. There eventually came a day where they found themselves engaged in their fiercest battle. A nearby building got destroyed and Spider-Girl threw herself under the debris to try and stop it from crushing the people. She was able to hold it long enough for them to get out, but the building continued to pile on and started to crush her.

She eventually blacked out, and by the time she woke up, she had been plucked from her reality by the Silver Sentry. She, alongside with alternate versions of Iron Man and Lightspeed, had been recruited to make up for the heavy losses Team X had suffered. April was hesitant to abandon the people of her reality, but after having the horrors of the multiverse explained to her, she realized there was no way she could turn her back. From there, she formed very close relationships with all of her teammates, believing it was important to trust one another in order to act as a cohesive unit.

She particularly looked up to the Scarlet Witch and her leadership style, as well as Iron Man, who had a close relationship with his universe's version of Spider-Man, and came to view April as a little sister.

Things got complicated when their teammate, Scorpion, perished on a mission, and he was replaced with none other than her Uncle Venom. April was perplexed and enraged, demanding answers from the Silver Sentry, who refused to engage with her. Tensions within the team continued to rise as Spider-Girl's distrust of her uncle began to sow fear throughout the rest of the team. However, Venom continued to prove himself on each mission, and the two of them eventually had a heart to heart talk, where Venom confessed that after her apparent death he had an awakening and began to consider himself a monster, wishing to make amends. He did so by doing what no one else in April's life ever could; he hunted down and murdered the Grim Reaper. He told her that he wanted a chance to be the Uncle he never was for her, like his Uncle Ben was for him.

After the Scarlet Witch was removed from the Team by the Sentry, the Tallus was then passed on to Spider-Girl. Overwhelmed by her newfound leadership, she found herself forming something of a tense relationship with original Team member, Cyclops, who had just rejoined. However, on their next several missions, Spider-Girl was able to prove herself as a leader and complete most of their missions with little complications. However, after Lightspeed and Iron Man left the team, she felt a little shaken, as if she had lost her rock connecting her to the team. From the start, the three of them had been together and formed a close bond. However, her Uncle, as well as relatively new team member, Black Cat, attempted to make her feel better.

Unfortunately, not long after Iron Man and Lightspeed left the team, they found themselves on a mission involving Morlun. Spider-Girl had only ever heard frightening stories of how dangerous Morlun was, and the horrible things he had done to her father. While Team X was occupied rescuing the hostages Morlun had placed in key locations, April faced him head on, and found herself sorely outmatched. However, she was able to hold him off long enough for the hostages to get rescued. After beating her to within an inch of her life, he made his escape, and as April lay dying, her team members surrounded her to keep her company in an attempt to make her final moments pleasant. Venom shed his symbiote and pled with April to stay with him, and with her final breath, she smiled at him and reminded him that with great power comes great responsibility, and she had fulfilled hers, and she had no regrets. When she finally let go, he screamed and cried and begged for her to come back, but to no avail. She was gone, and he became so shaken and disconnected from the Team's mission that he was forcibly removed from the Team.

Her body was eventually returned to her home reality for Hawkeye and Black Widow to properly mourn her.

Retrieved from "https://marvelcomicsfanon.fandom.com/wiki/April_Parker_(Earth-16)?oldid=262374"
Community content is available under CC-BY-SA unless otherwise noted.