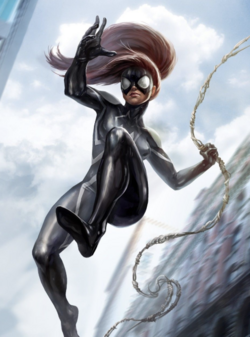 Earth-24190
Base Of Operations
Her Apartment
Characteristics
Gender

We've done some bad things, we've hurt people, but now... we just want to make up for it

Anya Corazon grew up in poverty in Mexico before immigrating to America with her father after her mother died of disease. She grew up in New York and was eventually accepted into a community college. However, her father had gotten himself involved with the wrong people, who killed him and kidnapped Anya, performing experiments on her with stolen technology that created Spider-Man. Mutating into a cross species, she became terrified of herself until she met Spider-Man, who helped her come to terms with her new life. After training extensively with him, she became Spider-Woman. She would eventually come into contact with the Venom symbiote, which had been without a host following Eddie Brock's death. Despite Spider-Man's warning, Anya allowed it to bond with her and the two were able to come to an understanding. Anya convinced the symbiote that it had the potential to be an amazing hero, and, having grown tired of Brock's constant craving for vengeance, Venom agreed. Since then, the two have been working together as an amazing team.

Spider-Woman was eventually recruited into the Outsiders under the promise that if she returned to her home world, she and Venom would be forcibly separated by Doctor Octopus, who would then take the symbiote for himself and kill hundreds of people.

Spider-Woman served a long time with the Outsiders, becoming close with her fellow teammates, especially Sabre and Firestar. However, when the Outsiders would gain control of the Palace, located within the Outside, Spider-Woman chose to retire and return to her home with the plan of telling Peter she has always loved him, coming to this conclusion after meeting several other Spider-Men across the multiverse, and even watching a few of them die. She did, however, promise the Outsiders that if they ever needed her, she'd be happy to help.

Retrieved from "https://marvelcomicsfanon.fandom.com/wiki/Anya_Corazon_(Earth-24190)?oldid=245798"
Community content is available under CC-BY-SA unless otherwise noted.