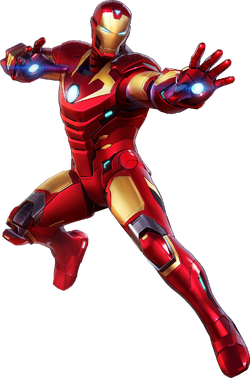 Engaged
Occupation
Leader of the Avengers
CEO of Stark Enterprises
Philanthropist
Education
Massachusetts Institute of Technology
Origin
Origin
Born a child prodigy, Tony took comfort in inventing gadgets and gizmos after being pushed away by his father, Howard. However, Tony ended up in a horrible accident and he was saved by an Arc Reactor implanted in his chest to save his life. After taking the company, Tony began to build his first Iron Man suit after attempts. He later founded the Avengers with his hero, Captain America.
Place of Birth
Newark, New Jersey, USA
Creators

That handsome guy flying in a suit of armor? That's me -- the great Tony Stark

Antonio Reyes Giorgiotto Stark was born in Newark, New Jersey to Ruggiero "Howard" Stark and Mariona "Maria" Stark (neé Montanino) and is the grandson of the then-deceased Maximiliano Inigo Stark who was an industrialist. Tony's mother passed away when he was only 3 years old which devastated Howard and he began to drown himself with work for he had become the CEO of Stark Enterprises after Inigo's passing two years before Tony's birth.

Tony's childhood came off at a rocky start, for Howard would act cold and hostile towards him every time Tony would try to spend time with him. Tony reacted badly from his father's lashing and would spend his time experimenting with technology at the early age of 5 where his genius-level intelligence began to flourish. He created his first computer, JARVIS and was able to communicate with him whenever he felt lonely. As he grew up, Tony tried to get his father to spend time with him but the man continued to neglect him, putting his work onto his company as he tried to cope with Maria's death. As a result, Tony's intelligence began to reach into his full potential, creating inventions that were greater than Howard's.

However, everything changed when Tony was in his early teen years and his strained relationship with his father was at its greatest. In his junior high years, Tony was on a field trip with his school where he was on a tour in Alchemax Industries where they specialize in technology, robotics, and military weaponry. Things go wrong however when one of the laboratories exploded inflicting a huge crossfire all over the building. Tony was caught in the middle of the accident and it left him mortally wounded. Tony was rushed to the hospital where Howard was alerted of what had happened and he demanded emergency surgery on him. The doctors implanted an Arc Reactor into Tony's chest in order to save his life. The operation was a success and Tony was able to recover but Howard was already stricken with regret and when he faced Tony, he was met with silence. But days later, Tony manages to speak to Howard, patching things up between each other. Tony would later show Howard what he had been doing and it brought Howard into astonishment that Tony took the time to show off his gifted intelligence.

After graduating from the Massachusetts Institute of Technology, Tony began to start to live a carefree life at the early age of 20. Partying and messing around both day and night, Tony began to have a taste of having a lavish lifestyle. But this didn't sit well with Howard -- he had just reconciled with his son yet he began to waste his potential in partying and being a playboy. After Tony turned 21, Howard stepped down and made Tony the new CEO of Stark Enterprises. Tony wasn't very happy about what his father did, but the man informed him that he has a gift and he shouldn't waste it in being careless, thus having him learn about responsibility.

At first, Tony refused to take part in being the CEO due to his young age, but he soon realized that Howard hasn't been feeling well -- in fact, he discovered that his father was diagnosed with leukemia. Within the next few months, Howard guided Tony in the business world, using his intelligence to create technology that would mold the world for a better future. Tony soon start to understand his father and it got him close to him than before. Unfortunately, Howard loses his battle to leukemia, leaving Tony to live up the hard work his father and grandfather left behind.

After the passing of his father, Tony began spending his time polishing the company into his own, expanding different branches worldwide from the United States and the United Kingdom to Australia and Japan. Using his genius, he has developed and designed technology that had changed the world completely. He put all of his happiness from developing his first inventions and the pain from his father's coldness and his passing altogether and made the company to one of the most successful companies, knocking Oscorp and Alchemax off the #1 spot. Tony knew he missed his father very much but he knew that he must move on as the CEO. However, his inspiration came when he saw the original X-Men taking on Galactus. Seeing how much good they brought into the world, Tony wanted to do the same thing. Reaching into his old belongings, he takes out an old sketchbook which he had been using since he was a child and stumbled upon a sketch of what it looked up to be a design of an Iron suit and a new form of inspiration took over him.

With a new set of determination and the newly developed technology, Tony made it clear that he was going to make the perfect Iron suit. Unfortunately, each suit that he made came with different bumps in the road. Frustration built within Tony as he used every method in making the perfect iron suit, but he didn't stop because he didn't want to put all of his hard work to waste and eventually, Tony finally made his first official Iron suit. Testing its flight capability and its arsenal he had installed within the suit turned to be a complete success.

Finally achieving his goal, Tony dubbed himself Iron Man as he made his superhero debut by capturing everyday criminals and soon superpowered villains, earning him lots of recognition from the news, entertainment, and social media. As a result, it put his company in a high pedestal which would've made Howard very proud.

Tony's newfound fame as a hero made him a household name and his success as an inventor and business brought him back to the lavish lifestyle, his playboy and partying ways resurfacing. As he began to enjoy the life of being a hero, reality suddenly came to its return when he discovers that the HYDRA had made their first attack on New York. After suiting up, Iron Man battled against the soldiers of HYDRA but when he went to face Red Skull, the battle had become serious and Iron Man was nearly outnumbered despite being in his suit. Just as Iron Man was about to ready himself for another battle, he was met by his childhood hero Captain America who shows up just in time to help. Together, both Iron Man and Captain America defeated Red Skull, who was forced to retreat. After the battle, Tony thanked Captain America for helping him and commented that they could be a great team -- and that gave Captain America an idea. An idea that would change Tony's life for the greater good.

Together, Iron Man and Captain recruited a team of heroes with power, strength, intelligence, and skill -- known as the Avengers: Earth's Mightiest Heroes. Consisting of the Hulk, Thor, Black Widow, Vision, and more, Iron Man began to develop a new duty of leadership along with Captain America. Some came and went, but the Avengers have paved their way until they began to recognize the fame of Peter Parker aka Spider-Man who has defeated the Green Goblin and has now become a world phenomenon and has opened a lot of doors for more heroes around the world. After Spider-Man was recruited after the HYDRA's return, Tony began falling in love with the web-slinger, however, Spidey wasn't having it due to his past failed relationships and the loss of Gwen Stacy, not to mention Tony's past life as a carefree playboy. However, after Peter was badly beaten while facing Morbius, Tony took care of him until he reached for recovery and became accompanying him whether it was just to spend quality time or on missions. Tony's feelings for Peter began to become evident and he confesses to him how much he meant to him and wants to remain by his side at all cost. This made Peter realize his own feelings and soon gives in, telling Tony he felt the same way as well, resulting in the two sharing a passionate kiss, starting their romantic bond.

Tony later proposes to Peter at Captain America and Falcon's wedding ceremony, getting praise from two newlyweds and the other heroes.

Retrieved from "https://marvelcomicsfanon.fandom.com/wiki/Antonio_Stark_(Earth-7090)?oldid=267835"
Community content is available under CC-BY-SA unless otherwise noted.