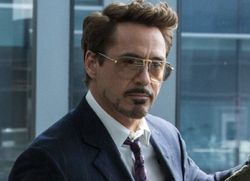 The Merchant of Death
Identity

I am Iron Man. Technically. I mean, I created Iron Man.

Tony Stark is the CEO of Stark Industries who created the Iron Man armor worn by his best friend, James Rhodes. He used to have a weapons deal with S.H.I.E.L.D., but reneged it after the organization was revealed to be a front for Hydra. Seeking to make amends for his weapons hurting people, Stark offered to bankroll the Avengers and house them at Stark Tower.

Retrieved from "https://marvelcomicsfanon.fandom.com/wiki/Antonio_Stark_(Earth-1420)?oldid=245797"
Community content is available under CC-BY-SA unless otherwise noted.