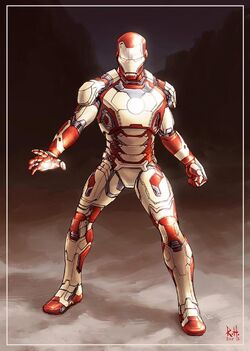 Earth-1315
Base Of Operations
Stark Tower, The Triskelion
Characteristics
Gender

Black
Unusual Features
Has an Arc Reactor implanted in his chest, which maintains his body functions.
Status
Citizenship

Single
Occupation
Adventurer, Inventor, Industrialist, founder of the Maria Stark foundation, president emeritus of Resilient; former United States Secretary of Defense, Executive Director of S.H.I.E.L.D., CEO of Stark Enterprises, Stark Enterprises, Stark Solutions, Circuits Maximus & Stark International, computer technician
Education
Multiple PhDs in Physics and Electrical Engineering
Origin
Origin
Tony Stark was born to parents Howard and Maria Stark. During a conflict in Afghanistan, Stark was captured by terrorists and, with a piece of shrapnel in his heart, was about to die. Constructing a suit of iron armor that would also help with his recovery, Stark broke out of captivity and journeyed back home to the United States where he built an advanced suit of armor and become Iron Man.
Place of Birth
Long Island, New York
Creators

Antonio "Tony" Stark was born on Long Island in 1990, he was the son of genius Howard Stark and also idolized Captain America as a child, at age 2 he showed signs of intelligence just like Reed Richards as a child. At age 15, Tony graduated High School and graduated College at age 18. At age 19, Tony took over the family business after his parents were killed in a car crash.

In 2012, Tony Stark travelled to China in an expedition to show the Chinese his new weapons and how much they will cost but it was a trap, the terrorist (who thinks he is doing good) ambushes Stark and blows the building up but Tony survived at a cost. A Chinese doctor placed an Arc Reactors in his chest to keep his heart pumping, Tony thanks the man and pays him 1 million dollars and heads back to America.

After Tony arrived in America he wanted revenge on the Mandarin but also wanted to protect the people from his insanity but mainly revenge. After 22 attempts he finally built the "Iron Man" armor and tested it out and finally managed to fly, after that he flew to China and went on a short quest to defeat the Mandarin.

While Tony was taking a day off as Iron Man, Tony saw on the news a green monster was roaming and destroying the streets of New York, he went to defeat him and eventually a band of superheroes assembled to defeat him. A few weeks later Nick Fury called the heroes in and suggested they form a team, the heroes accepted.

A few months after Tony had joined the Avengers, the government asked if he would personally build them an armor, Tony said he would only if his friend Rhodey would pilot the armor, a deal was made and Tony built the armor.

Thanks to the Repulsor Tech node implanted in his chest, which is linked to his brain, Tony is able to interact with different types of energies and forces a normal human can't. The R.T. node acts like a new sense for its user. The reactor's excessive generation of energy provides Stark with an increased amount of intelligence and gave him superhuman-level multitasking and learning capabilities.

Energy Emanation: The R.T. node not only provides repulsor energy to run devices such as the Iron Man Armor, its user can produce beams of energy at will, possibly weaker and less directed than the Uni-Beam.

Enhanced Senses: The reactor also increases the senses of its user, allowing Tony to "hear better" for example.

Enhanced Strength: The R.T. node allows who possesses it to have a greater strength.

Enhanced Healing and Durability: It has been shown that an user of an R.T. node not only recovers incredibly fast from different types of injuries but also to resist more physical damage than an average human.

Psi-Shields: Due to S.H.I.E.L.D treatments, Stark's mind is shielded from even the strongest telepaths alive when he was the director of the organization.

Suiting up the Iron Armor: The armor used to require several machines to put on the suit, in a lengthy process. Later, this was changed to having it in a suitcase, which shortened the suiting up time, but was not very effective on the battlefield. The deposition of the armors changed over time, being able to hold the armor within himself, and use it when needed, and spring into action in mere seconds. A new model of armor uses intelligent liquid metal to generate itself around Stark.

Crystallized Iron Armor: The armor has evolved from a bulky iron suit to a highly complex matrix of molecularly-aligned fully crystallized ultra high carbon iron/steel hybrid alloy enhanced by magnetic fields over layers of other ultra hyper alloys like titanium alloy and or tungsten/vanadium alloys reinforced with carbon nanotubes creating a shell that is pliable, yet capable of amazingly high resilience and protection.

Super-Genius class Intelligence: Quite apart from the powers granted him by the suit, Tony Stark is far more than a mechanical engineering prodigy who graduated from the Massachusetts Institute of Technology with honors at the age of 17.

With an intelligence classed as super-genius, he is one of the smartest people on Earth. Furthermore, this extends to his remarkable ingenuity dealing with difficult situations such as difficult foes and deathtraps where he is capable of using his available tools, like his suit, in unorthodox and effective ways, as an example: when he built the first Iron Man Armor in captivity. He has also been able to hack even technology from the aliens Kree, a race centuries more advanced than humans.

Tony is known as a "futurist". He has stated that the way his mind works he can intuit the future, even being able to foreshadow that a situation similar to the superhuman Civil War was going to happen, years before it did.

More recently, Stark's intelligence grew to super-human levels with more energy being emanated to his brain thanks to the R.T. node in his chest, levels which even left Mr. Fantastic amazed.

Expert Engineer: He is an excellent engineer and mechanic capable of fixing almost, if not all, any machinery.

Expert Businessman: Stark is extremely well-respected in the business world, able to command people's attentions when he speaks on economic matters by virtue of the fact that he is savvy enough to have, over the years, built up several multimillion dollar companies from virtually nothing. He is known for the loyalty he commands from and returns to those who work for him, as well as his impeccable business ethics. He also strives to be environmentally responsible in his businesses, and in one case, immediately fired an employee who made profitable (but illegal) sales to Doctor Doom. He states that if he wanted to, he could give away his entire fortune and build it up again within a week.

Expert Tactician: He is a brilliant tactician capable of quickly formulating battle strategies and new plans if the situation changes, like being able to elaborate different complex plans in order to defeat different enemies in difficult situations, and be victorious. Even going as far as to simultaneously put Reed Richards in check on five different boards playing chess, a game he didn't learn until later in his life, leaving Richards totally astonished.

Skilled Combatant: Stark was trained in unarmed combat by Captain America and has become quite physically formidable on his own when the situation demands it. He once managed to defeat five trained Skrull soldiers in single-handed combat and numerous Voldi gladiators.

Indomitable Will: As evidenced by his two serious bouts with alcoholism and subsequent recovery, Stark is possessed of tremendous strength of will, never giving up and often emerging from defeat even stronger. It is arguable that the true "Iron Man" is not the armor, but Stark himself.

Without his armor Tony Stark possesses a strength a little superior than that of a normal human, he also engages in moderate regular exercise. The armor amplifies Stark's strength to incalculable levels, enabling him to normally lift (press) roughly 100 tons. If sufficiently powered by an outside source, the armor can achieve massively higher levels.

R.T. node Dependence: The Repulsor Tech node implanted in Stark's chest has the basic machine codes to keep Stark's Extremis-modified body working. So it needs to be in constant connection with him.

Alcoholism: Tony has been battling against his alcoholism due to the high pressures of running his industrial company, maintaining his social profile, and being Iron Man. More recently, he started to drinking again when, because of the Serpent arrival on earth, he believed it was the apocalypse.

Transportation: When not traveling in his armor or using a Quinjet as an Avenger, Stark owns a number of vehicles. Some of them have been modified, such as a Ferrari capable of flight.
Weapons: Various repulsor weapon systems by Iron Man armor

Retrieved from "https://marvelcomicsfanon.fandom.com/wiki/Antonio_Stark_(Earth-1315)?oldid=256259"
Community content is available under CC-BY-SA unless otherwise noted.