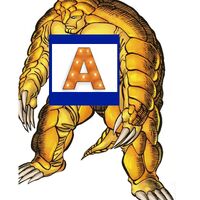 Bald
Skin
Orange
Unusual Features
His body has been transformed into an orange-skinned creature with a thick hide, claws and armor plates, similar to an armadillo's.
Status
Citizenship

Dr. Malus, I need your help, I need to be reinvented, I can't go on like this, I wanna change, but they cannot trust a man like me.

-- Antonio asking Karl Malus to experiment on him.

As a child, Antonio and his alleged older brother Adrian were raised in an orphanage since their parents were missing. As Antonio got older, he took the last name Rodriguez, whereas Adrian took the last name Toomes. Adrian was abusive towards Antonio and was probably the cause of him becoming a crime lord later in life. Eventually, the brothers were separated and Adrian grew up to be a HYDRA scientist.

Later on, Antonio started out life as a crime lord who dedicated all his time to robbing banks and mugging people. One day, he mugged a couple, he then heard their son, Dane scream in horror, after that, Antonio decided to give them the money back. Then he decided to go to see Dr. Karl Malus in order to reinvent himself, he then mutated into an armadillo-like creature with super-strength and the power of shapeshifting, he made himself known as Captain America indicated by the blue patch on his chest with an "A" on it.

Antonio took up the guise of scientist Dr. Henry Walters and had a daughter but gave her up for adoption, she was adopted by another family with the surname Walters and was named Jennifer. As Henry, he met and worked with Ted Sallis many times.

several years later, Antonio started a rebellion against the Ruler Regard along with James Howlett, Jennifer Walters, Kallark and Ted Sallis. They attacked the Ruler Regard knowing their weaknesses, and Skaar bludgeoned Ted, killing him, and Antonio knocked Skaar off a cliff using his own sword as revenge. He went on many other missions with his rebellion.

Jennifer then found out about Antonio being her actual father and hired Dane Whitman, now an assassin named Juggernaut who is empowered by the Crimson Gem of Cyttorak, to kill him. Dane tried to kill Antonio, but then recognized him as the guy who mugged but gave the money back to his parents. Jennifer, shocked that Dane couldn't kill Antonio, brainwashed him into being her henchman. She asked him to find the Blue Cloak Nautom Crystal, which he easily does, despite Antonio trying to stop him. Antonio went back home, unaware of what the crystal would do to Jennifer, not knowing that she already had the Crystal, which had caused her to become the new avatar of an entity known as the Blue Nautom, rebranding herself "Shahonda".

The next day, Jennifer confronted Antonio and asked him why he gave her away. Antonio gave her no answer, throwing Jennifer out the window and doing his best to stay away from her.

Antonio left the Rebellion, telling Kallark that he had bigger problems to deal with. Kallark was left to rebuild the team with new members under his leadership.

Resurrection Of The Man-Thing

Antonio then went to hell to retrieve Ted Sallis' soul, he succeeded, and the newly resurrected Ted left the rebellion.

Ted then announced his true identity as Antonio, Kallark and Lord Wolverine watched.

Antonio and Wanda's future son Samuel Maximoff came to the future to get them to fight Agamotto, a sorcerer from the future. Antonio recruited Heimdall, Galactus, Lord Wolverine, Midas and the Scorpion. John Walker was easily killed by Agamotto's goons, but Midas was able to save the others.

Reunion with his brother

After the fight with Agamotto, he met up with Adrian in his lab at the HYDRA hideout, and they reflected on their childhood. Adrian admitted he was sorry for abusing him.

Retrieved from "https://marvelcomicsfanon.fandom.com/wiki/Antonio_Rodriguez_(Earth-37U)?oldid=265690"
Community content is available under CC-BY-SA unless otherwise noted.