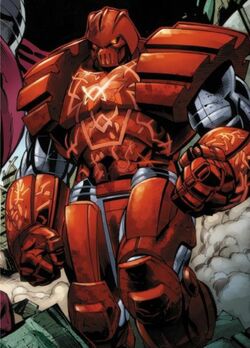 I assure your death will be certain, Howard, and I will have my REVENGE!

Anton Vanko was born in the Soviet Union and grew up to become a brilliant scientist. In 1946, he was working for the SSR (Strategic Scientific Reserve) during World War II, in a secret New York facility. After the war, he became one of Howard Stark's business partners, working at the newly-established Stark Industries, and joined S.H.I.E.L.D. as well for an amount of time.

When Peggy Carter discovered that one of Howard Stark's formulas had been weaponized, she and Edwin Jarvis took a diffused version of that weapon to Anton Vanko. He concluded that Roxxon Oil Corporation could be one of few candidates capable of producing the weapon. He also added that the Nitramene emitted Vita Radiation.

Together, Vanko and Howard worked on developing the Arc Reactor technology under the title of The Unity Project. However, they had an ideological disagreement. Anton wanted to use the research to make money, while Howard wanted to help humanity with it. In 1967, it was discovered that Anton Vanko was guilty of espionage. Howard Stark took credit for all the Arc Reactor research and Anton was deported back to the U.S.S.R.. Because Anton couldn't develop the technology on his own for the Soviet Union, he was supposedly sent to Siberia for 15 years until he was immediately and secretly been pardoned by an unknown secret agency, who eventually gave him an offer for his recruitment in their organization in the exchange for any price of money he would have wanted if he decided to work with them.

After revealing that he was gonna be secretly working for Hydra, he had a second thought of declining their offer until one of the organization leaders offered him the chance to work for them and join them not just for the exchange of any price of money but also granting what else we truly wants in his life, including his desire to kill Howard Stark for ruining his life and as well as becoming a very powerful and wealthy man.

During his time working for Hydra, he began recreating and reworking his own version of the Arc Reactor technology that he and Howard had worked on years ago. He was successful and created a miniaturized version of it so he could worked for a specialized suit that they were working on before. He manages to get the Arc Reactor-powered suit and named it the Crimson Dynamo. Impressed by his work, the superiors of HYDRA increased his rank in the organization and made him the superior of his own division. Due to Anton's brilliance, the creation of the suit led HYDRA to recreate and keep duplicating the Crimson Dynamo suits in order to create an armor-suited army for HYDRA.

After become a very powerful and wealthy Hydra superior, Anton eventually thought it was time for him to seek revenge on his old partner and friend, as well as taking down his old agency, S.H.I.E.L.D., believing that they also had "betrayed" him. Due to this, he and his army of super-soldiered subordinates planned on infiltrating a S.H.I.E.L.D. facility in an old secret base where Howard was researching back then, so he can get the chance to kill him. Just like his men, he would be suiting up in his original Crimson Dynamo Suit. During the assault, Anton and his men managed to kill several S.H.I.E.L.D. personnel until they were eventually defeated as well after Howard found a way on disarming the suits except for Anton's after he successfully evades it.

After managing to successfully corner Howard Stark, Boris Turgenov who is a KGB member and secretly a S.H.I.E.L.D. agent (now wearing Howard's own prototype version of the Crimson Dynamo suit) manages to arrive in time to stop Anton, unintentionally flying him into the streets of New York City, where they fought, until he was eventually defeated. Accepting his defeat, Anton has no choice left but activated the self-destruct mode in his suit, a nuclear reactor that is large enough blow up and destroy the whole country, intending to take Howard, Boris, and everyone else with him. Because of this, Boris made the ultimate sacrifice by flying him as far as he can away from the city, flying him until they reached into the planet's exosphere, where the nuclear bomb eventually exploded, killing them both. Anton's last words were supposedly "Hail Hydra" until Boris punches him, knocking him out and replied to him invoking the terrorist organization, just before the explosion occurred.

Years later, his legacy was eventually remembered by his estranged son who became the supervillain known as Whiplash, who kept on seeking revenge on Howard's son, Tony Stark known in the present day as the superhero known as Iron Man, for he believes that the Starks were the one responsible for making their lives miserable. The legacy of his Anton's brilliance on creating the Crimson Dynamo has also led to several people donning the recreated and more advanced versions of the suit by the same name, either they are doing it for the name of good, evil, or neutrality.

All of Anton's riches have secretly been kept by Hydra until the events Hydra Uprising, where Ivan finds out about that his father's riches and credits (that were supposed to be his rightful inheritance) were kept by the terrorist organization. During Ultimate War, Ivan tracked the location and went into the secret vault where all of his father's riches and took all of it and left before the Hydra soldiers could find him and track him down. Ivan eventually used his money and converted it to build up his father's legacy by recreating and improving the several advanced super-weapons that Anton built back then, so he used it in his life of crime against Tony Stark and anyone else who would stand on his way.

Vanko possessed no inherent superhuman powers. All powers were derived from the Crimson Dynamo Armor MK I.

Retrieved from "https://marvelcomicsfanon.fandom.com/wiki/Anton_Vanko_(Earth-61615)?oldid=231481"
Community content is available under CC-BY-SA unless otherwise noted.