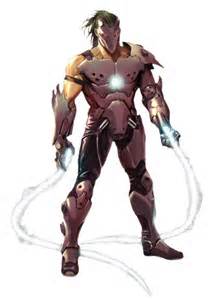 Single
Occupation
Assassin
Origin
Origin
A man from Russia who built a suit of armor to get revenge on Iron Man for the destruction of his village, and the death of his father.
Creators

Little is known about Whiplash's life before the Secret Invasion. It can be assumed to be similar to his mainstream counterpart. Whiplash was contacted by the Taskmaster to combat the Skrulls as a member of the Ultimate Alliance.

Vanko is a skilled athlete and has great knowledge of technology, as he was able to make his armor from a destroyed piece of Stark Technology.

A hard enough impact will cause his armor to lock up.

Equipment: A suit of armor crafted from the Iron Man Mark 16 armor and equipped with two electrically charged whips in the wrists. The whips are strong enough to slice through a metal staircase and can deflect bullets or be spun like propellers for limited flight. A pair of infrared contact lenses that give him night vision and the ability to perceive thermographic images through solid objects.
Transportation: Quinjet
Weapons: Two whips constructed from the copper wires of the electromagnetic motor that powers the Mark 16 armor's weaponry. The whips are spring loaded and can extend up to 25 feet in length. The whips can be used for a variety of offensive and defensive maneuvers, Whiplash primarily uses them for slicing through solid objects.

Retrieved from "https://marvelcomicsfanon.fandom.com/wiki/Anton_Vanko_(Earth-6109.2)?oldid=201583"
Community content is available under CC-BY-SA unless otherwise noted.