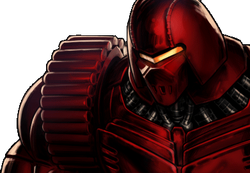 Anton Vanko was a defected Russian physicist who helped Howard Stark design the Arc Reactor. The scientist was deported when it was clear he was working for money rather than for the benefit of humanity. Anton fell into alcoholism and proceeded to abuse for many years his young son Ivan, who would later become a physicist as his father was.

Vanko possessed no inherent superhuman powers. All powers were derived from the Crimson Dynamo armor.

Without his armor, the Crimson Dynamo possessed the normal human strength of a man of his age, height and build who engaged in minimal regular exercise.

Without the armor, Vanko possessed all of the conventional vulnerabilities of any normal human. Though the armor was durable, it was poorly insulated and the circuitry was particularly vulnerable to short outs if exposed to water.

Retrieved from "https://marvelcomicsfanon.fandom.com/wiki/Anton_Vanko_(Earth-1010)?oldid=100102"
Community content is available under CC-BY-SA unless otherwise noted.