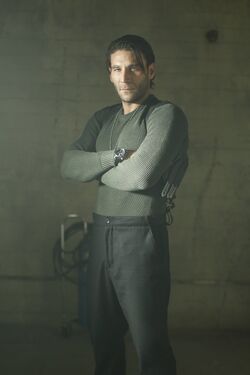 Anton Ivanov lost respect for his father, an oil drill worker, when he saw him sucking up to the richest man in town. His father worked hard for what little he had, while the other man inherited his wealth and never worked a day in his life. Ivanov firmly believed that everything one had in life should be earned through old-fashioned hard work, not given unfairly.

As a young man, Ivanov joined the SVR. His unit was sent to recover a device from a mine in the Russian coutryside. His unit was met by S.H.I.E.L.D. agent Phil Coulson, who claimed to be a representative from the United Nations. While Coulson spoke with the commander of Ivanov's unit, someone else drove off with the device they were sent to recover. Realizing they had been tricked, the commander took Coulson into their custody. As the unit drove away with their prisoner, Coulson's ally ambushed them and rescued him. The three other members of Ivanov's unit were tortured and executed to cover up their failure.

Over the next several years, Ivanov became an incredibly wealthy industrialist, using his vast fortune to collect various military antiques, including a Cold War-era submarine. However, his thirst to avenge his comrades never went away. Ivanov combed through newspapers and rumors for any sign of the man he blamed for their deaths. Eventually, he found that Coulson was not only connected to several incidents of "alien" activity, but also came to believe he was responsible for them, too.

Ivanov naturally connected the rise of Inhumans to his nemesis Coulson. He became involved with the Watchdogs, a radical anti-Inhuman hate group tied to several attacks against Inhumans. Operating out of his personal submarine, Ivanov quickly rose through the Watchdogs' ranks, coming to be known by his subordinates as "The Superior."

The Superior eventually came into contact with Devi Deol, an Indian-American senator with her own strong anti-Inhuman sentiments. With Senator Nadeer's help, Ivanov's Watchdogs were able to conduct multiple simultaneous attacks against Inhumans in several major cities across the globe. Although S.H.I.E.L.D. eventually foiled their plans, the Watchdogs were able to kill 17 Inhumans by the end of the day.

Retrieved from "https://marvelcomicsfanon.fandom.com/wiki/Anton_Ivanov_(Earth-1010)?oldid=184220"
Community content is available under CC-BY-SA unless otherwise noted.