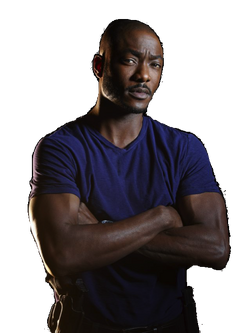 If I was the grandson of a Howling Commando, I'd have that tattooed on my chest!

Agent Antoine Triplett is an agent of S.H.I.E.L.D. At some point, he was partnered with Agent Dan Monroe, who was killed by the Clairvoyant, the mysterious leader of Project Centipede, during their team's search for Ian Quinn. Afterwards, Triplett was personally driven to see that the Clairvoyant would be captured.

Agent Triplett accompanied agent John Garrett when he boarded Agent Phil Coulson's plane to retrieve Ian Quinn. Although the other agents' presence on the plane was initially tolerated, Triplett soon got into a physical confrontation with Grant Ward. When Garrett left with Coulson, Ward, and Fitz to infiltrate the Guest House, Triplett was left behind on the plane in case his medical training would be needed to help the seriously-injured Skye. Once Garrett returned, the two agents left with Quinn for the Fridge.

Garrett and Triplett were then ordered to track down the Clairvoyant and his bodyguard, Mike Peterson. Soon after arriving at a safehouse in Sydney, Peterson attacked the two agents, leading them to believe they were closing in on the Clairvoyant's location. They then regrouped with agents Victoria Hand, Felix Blake, Jasper Sitwell, and Coulson and his team to bring them up to speed on their search.

Garrett believed the Clairvoyant might be one of the thirteen individuals S.H.I.E.L.D. once suspected of having psychic abilities but were ultimately rejected from the gifted individuals index. Skye, fully recovered since the last time Garrett saw her, divided the agents up into three teams of two to investigate individuals suspected of being the Clairvoyant. Triplett was paired up with Ward, and was sent to a prison in the United Kingdom to investigate Elijah Fordham. There, Triplett informed Ward about Agent Monroe and his history with the Clairvoyant. However, after Peterson attacked agents Blake and May in Macon, S.H.I.E.L.D. search narrowed in on Thomas Nash. While Garrett accompanied Coulson and his team to Pensacola to track down Peterson, Triplett stayed behind at the Hub.

Once Hydra activated its agents within S.H.I.E.L.D, Trip and Jemma Simmons barricaded themselves within a lab in the Hub after receiving a warning from agent Anne Weaver at the S.H.I.E.L.D. Academy of Science and Technology. To show that he was not with Hydra, he gave her his knife, stating that if she attacked him, then he would know he could't trust her. However, Agent Hand broke into the room with a team of agents, and threatened to kill both of them if they did not swear their allegiance to Hydra. In response, Triplett took one of Hand's agents hostage, at which point Hand revealed the whole situation had been a test to prove they were not allied with Hydra. Later, Triplett was incensed when he learned that Garrett, his mentor and commanding officer for many years, was revealed to be the Clairvoyant and an operative of Hydra.

When Colonel Glenn Talbot's "peace keeping" forces were sent to the Hub, Triplett evacuated the facility with Coulson's team. When Coulson suggested that they head to the coordinates hidden on his badge, Triplett was the only one to object, believing that they might be heading into one of Hydra's traps. However, Coulson remained firm in his belief that Nick Fury himself sent those messages and Fitz supported him. Ultimately, their search led them to Fury's secret base, Providence. Upon being subjected to a lie detector test by Agent Eric Koenig, one of the questions was as to why he was at Providence. Triplett stated that as his grandfather defeated Hydra in World War II, and he was certain that they would beat them again.

Triplett then accompanied Coulson, Fitz and Simmons to Portland to stop Marcus Daniels from harming Audrey Nathan. But when they returned to Providence, they found the Bus gone, and their teammates missing, and shortly thereafter found Koenig murdered and a warning from Skye that Ward was really an agent of Hydra. Despite Fitz's denial of the evidence, Triplett was more accepting of it given that his own superior officer was with Hydra. After repairing their communications on the Bus's location so they could track Skye and Ward, they were interrupted by Talbot, who had been led to the base by Maria Hill. After Hill was informed of Ward's betrayal, she helped them escape Talbot.

After Skye's rescue and May's return to the team, Triplett went over to his mother's to pick up his grandfather's Howling Commando gear to support the team. This helped them raid Cybertek, initially to activate a Trojan Horse virus Skye had hidden in the hard drive now in Hydra's hands, but also to steal the Project: Deathlok files. When they tracked the Bus to Havana, Triplett joined the team to investigate a defunct S.H.I.E.L.D. safehouse, and narrowly escaping a Hydra ambush while activating the Trojan Horse.

The team then followed Garrett and Ward to a Cybertek facility in New Mexico. Triplett and Coulson hijacked an armored truck to create a distraction and blasted a hole in the facility for May and Skye to infiltrate. When they were surrounded by Centipede super-soldiers, their attackers received a default directive to defend Garrett, as May and Skye had taken control of the control center. Coulson then exited the vehicle, intending to follow the soldiers to Garrett, and instructed Triplett to get out and warn the U.S. military. By the time Triplett returned, Garrett was dead, and Ward was captured along with the remaining Centipede soldiers. Triplett then rejoined the rest of the team as they arrive at the Playground, where they met Eric's brother Billy.

Triplett continued in his role as a field agent following Coulson's directorship of S.H.I.E.L.D. He participated in the mission to retrieve information on an item known as the Obelisk from a former S.H.I.E.L.D. agent, but the mission was aborted when a superpowered assassin killed Browning and took off with his information. Once Coulson realized the assassin, Carl Creel, was working for Hydra and was going to attack the newly-promoted Brigadier General Talbot, Coulson had Triplett, May and Skye go to Washington to protect him from Creel. To this end, Trip bumped into Talbot, placing a phone in his pocket which Coulson used to let Talbot know about the coming attack.

After the army took Creel into their custody, May abducted Talbot and brought him back to the playground. When Talbot refused to help Coulson retrieve the Obelisk from their custody, Coulson had Triplett pose as a General to sneak his team and a team of mercenaries lead by Izzy Hartley into the base where the Obelisk was held. The mission objective to retrieve the Obelisk was thrown into disarray thanks to Carl Creel's interference, but Triplett continued on with May and Skye to capture a quinjet parked nearby. This at least was successful, and Triplett and Skye flew the plane clear of the base while May escaped on a stolen motorcycle.

Triplett and Skye flew the quinjet back to the Playground, where Coulson ordered him to have Mack take a look at it so he could reverse-engineer the cloaking technology. Triplett later took part in the mission to prevent Creel from handing the Obelisk over to his Hydra superiors; however, Lance Hunter betrayed the team and disabled them with his I.C.E.R. so he could personally get his revenge on Creel for Hartley's death.

Finding the Alien City and Death

After realizing his carvings were blueprints to a hidden alien city, Coulson began the search for it. In Hawaii, Triplett received the task to deliver a button to a General who was going to inspect the Kaena Point satellite station. He then headed to the Australian outback with Coulson and Fitz, where they reached a satellite station that went online when Kaena Point went down due to a "trojan horse" made of the button Trip had delivered and a watch Skye gave to an officer in the station. Inside, they were ambushed by Hydra's forces. Triplett was shot and was near death, however, a mysterious doctor arrived on the scene. He revealed himself to be Skye's father, and that he had used Triplett's life as a way to escape Coulson. Triplett's life had to be quickly saved by Coulson and Fitz. Though severely injured, Triplett survived the outcome.

Triplett was a part of the extraction team that was tasked with rescuing Raina. He then helped Fitz-Simmons install explosives around the alien city, so the temple within it could be destroyed. But when Agent May warned him that Coulson and Skye entered the temple, Triplett rushed to disarm all of the explosive devices. Upon succeeding, he entered the temple to extract Skye. However, the doors closed behind him, and Triplett found himself trapped inside with Skye and Raina. The Diviner soon activated, and Triplett was the only one unaffected by the mysterious mists released by the crystals inside the Diviner.

Horrified, he watched Skye and Raina as they became sheathed in stone-like cocoons. He then destroyed the Diviner and the crystals within it, in a desperate attempt to save Skye's life. Triplett was then impaled by the Diviner's shrapnel. Since he wasn't worthy of touching it, Trip slowly petrified and died. When Skye's and Raina's cocoons started hatching and Skye manifested her powers for the first time, she watched as her seismic abilities crumbled the statue that once was Antoine Triplett.

Antoine Triplett is a highly trained operations agent with a varied skill set also including skills more typical of S.H.I.E.L.D.'s science and technology division.
Engineering: Knowledge enough of aircraft avionics to act as an aircraft mechanic.
Marksmanship: Triplett's firearms are typically common military small arms, and he is also an effective sniper.
Medic: Combat medic, trained to practice basic surgical procedures in the field.
Pilot: Fixed-wing aircraft with VTOL capability, up to and including quinjets.
Unarmed combat: Military training in unarmed combat, striking and grappling techniques.

Retrieved from "https://marvelcomicsfanon.fandom.com/wiki/Antoine_Triplett_(Earth-1010)?oldid=126368"
Community content is available under CC-BY-SA unless otherwise noted.