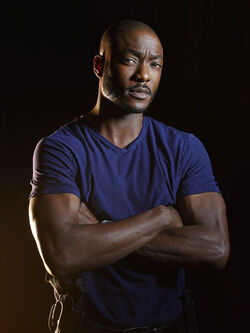 Sir, I bring the noise and the funk wherever I go.

Antoine Triplett is the grandson of the Howling Commando Gabriel Jones, and he always wanted to live up to his grandfather. But he didn't want special treatment, which is why he never told anyone about his legacy when he joined S.H.I.E.L.D.

He eventually wound up working under John Garrett, who was secretly an agent of Hydra. When Garrett revealed himself, Trip felt betrayed and heartbroken. He offered up his services to Phil Coulson, hoping he could join his team and burn Hydra to the ground.

Ever since then, he has become a dedicated member of Coulson's team and one of his most trusted agents. He became close friends with the scientists Fitz and Simmons, as well as the Inhuman field operative Quake. Unfortunately, Trip was forced to retire from active field duty after being paralyzed from a shot to the spine by Madame Viper. But he did not let that destroy his spirit, and he instead resigned himself to working in the lab with Fitz-Simmons, as well as helping operate missions from behind the scenes.

Retrieved from "https://marvelcomicsfanon.fandom.com/wiki/Antoine_Triplett_(Earth-101)?oldid=249918"
Community content is available under CC-BY-SA unless otherwise noted.