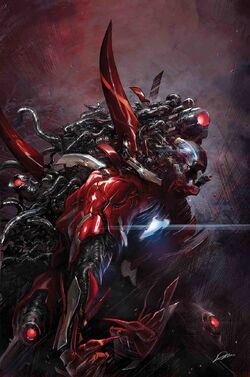 Shellhead, The Armor Without a Soul
Identity

I always believed the world would become a technological paradise... I just never imagined I would be playing this role in it.

Tony Stark was a S.H.I.E.L.D. Agent helping to headline the fight against Apocalypse. Following the fall of S.H.I.E.L.D., Iron Man teamed up with his fellow Avenger, Ant-Man, to create an artificial intelligence capable of bringing him down. However, after Ultron was brought online, he instantly betrayed his creators and began carrying out his programming by attempting to wipe out all life on Earth.

Ashamed and horrified, Iron Man launched an attack on Ultron's Citadel in Europe, only to be kidnapped and have his mind reprogrammed by Ultron, bonding him completely to his armor. He retained his personality and intelligence, but was now completely dedicated to Ultron's mission.

However, the humanity he still retained did lead to him starting an affair with Jocasta after she was implanted into Janet van Dyne's body, despite his fiance, Pepper, also being transformed into one of Ultron's drones.

After Ultron grew tired of Stark's constant insubordination, he transferred his consciousness into a new suit of armor dubbed "The Iron Mecha", essentially erasing what little humanity he had left.

Later, when the Outsiders came to Earth-9999, the Iron Mecha was sent to kill them by Ultron. During the battle, however, he was overpowered by the team and had his consciousness wiped out by Forge before Firestar completely melted his outer shell.

Retrieved from "https://marvelcomicsfanon.fandom.com/wiki/Anthony_Stark_(Earth-9999)?oldid=253033"
Community content is available under CC-BY-SA unless otherwise noted.