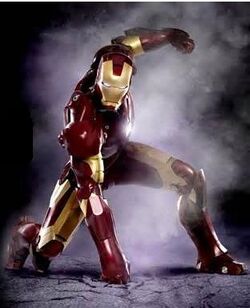 Black
Unusual Features
Has a R.T. node implanted in his chest, which maintains his body functions. Glows a light that is slightly bluer than white.
Status
Citizenship

Single
Occupation
Mechanical Engineer, Adventurer, Superhero, Inventor, Industrialist, founder of the Maria Stark Foundation, CEO of Stark Industries, computer technician, philanthropist
Education
Multiple PhDs in Physics Mechanical Engineering and Electrical Engineering
Origin
Origin
Son of Howard and Maria Stark. During a conflict in Vietnam now shifted to Afghanistan, Anthony "Tony" Stark was captured by terrorist group, the Tong Triad, and, with a piece of shrapnel in his heart, was about to die. Constructing a suit of iron armor that would also help with his recovery, Stark broke out of captivity and journeyed back home to the United States where he built an advanced suit of armor and become the armored superhero: Iron Man.
Place of Birth
Long Island, New York
Creators

Tony Stark was enrolled in boarding school at six, where he would soon start experimenting with erector sets. He went on to be his high school valedictorian. He then joins an undergraduate program at Massachusetts Institute of Technology at the age of 15, where he majored in physics and electrical engineering. Double majors in physics and electrical engineering were easy for him, and he received Master's degrees in both. He drifted into his 20's and became the idle rich, shiftless, and rootless, and traipsed around the world turning into a jet set playboy adventurer. When he was 21, his parents were killed in a plane crash, and he inherited his father's business, Stark Industries; within a few years he turned it into a multi-billion dollar industry complex whose chief contracts were for advanced weaponry and munitions for the U.S. government. Also buying the company that built the car and redesigned the brakes and fixed any of its future flaws.

Stark went to Afghanistan. Tony Stark became Iron Man during an unnamed conflict in Afghanistan to construct the "Jericho" missile. He ignored concerns that security was insufficient. The group came under attcak by the Tong, and Stark was shot in the chest. The gravely injured Stark was taken captive by the revolutionary leader Mandarin, and was informed that within a week the shrapnel would penetrate his heart and kill him. Mandarin offered Stark a deal: if he built the missile, Mandarin would allow Stark to undergo an operation to save his life. Knowing this was a lie, Stark agreed, hoping to gain time and access to tools.

Stark was given access to a small laboratory with another captive, the renowned Asian physicist and Nobel Prize in Physics laureate Professor Ho Yinsen, whose work Stark admired in college. With Yinsen acting as his assistant, Stark designed and built an electrically powered suit of armor equipped with heavy offensive weaponry. The armor also contained a pacemaker-like device that enabled Stark's heart to keep beating after the shrapnel entered it.

Donning the suit, Stark connected it to its power source, an electrical generator. Lying on a table Stark was helpless until the suit was fully charged. His captor, Mandarin, sensed something was amiss and came to investigate with armed men. Realizing he was sacrificing his life, Professor Ho Yinsen went out to confront Mandarin, to give Stark the extra time he needed to charge the armored suit fully. As the Iron Man, Stark avenged Yinsen's death and scattered Mandarin's guerrilla troops. Then, still clad in his armor, which was necessary to keep his heart beating, Stark made his way to the jungle, trying to escape enemy territory.

James Rhodes, a pilot in the United States Marines who was stationed in Southeast Asia, had been shot down in the jungle by rockets while he was on a reconnaissance mission. Rhodes managed to land safely and was attempting to get his helicopter air-worthy when he encountered Iron Man. After Iron Man helped Rhodes fight off an attack by enemy forces, Rhodes allowed him to drain the helicopter's batteries to recharge his armor. The two tracked through the jungle together, finally discovering a hidden rocket base. Stealing an enemy helicopter, they destroyed the site and flew to the nearest American base.

Back in the United States, Stark redesigned his chest plate, which contained a pacemaker-like device, reducing the chest plate's size and weight so he could wear it under his normal clothing. Required to wear the armor's chest plate at all times to keep his heart alive and beating, Stark decided to put the rest of the armor to regular use as well.

Stark announces that his company will no longer manufacture weapons. Obadiah Stane, his father's old partner and the company's manager, advises Stark that this may ruin Stark Industries and his father's legacy. In his home workshop, Stark builds an improved version of his suit, as well as a more powerful arc reactor for his chest.

The next day, Christine Everhart informs Stark that the Tong are attacking Yinsen's home village, Gulmira. Enraged, Stark dons his new armor and flies to Afghanistan, where he saves Yinsen's village. While flying home, Stark is shot at by two F-22 Raptor fighter jets. He phones Rhodes and reveals his secret identity in an attempt to end the attack.

Turns out the attack on the village was a distraction so that Mandarin can be able to build the Jeroche missile himself. He makes an announcement that he'll launch the missile at New York City if the United Nations not surrender. Stark arrives and a battle ensues between the villains. Rhodes secretly infiltrates the compound and shuts down the launch. However Mandarin incapitates Rhodes & Stark, and iniates the launch. Stark manages to fire his repulsor blasts at the missiles, blowing it up. He then fires the untested "Unibeam" at the Mandarin, knocking him out. With Mandarin and the Tong taken in by S.H.I.E.L.D., at a press conference, Stark admits to being the superhero the press has dubbed "Iron Man".

Tony Stark is, for the lack of a better word, complicated. During his early days of success, Stark was a man who only cared about fame and wealth. He had no sense of responsibility or humility, always rubbing his success on the face of everyone he met. This all changed when he was captured by terrorists. After building the first Iron Man armor and escaping captivity, Stark had realized the kind of person he really was and engaged in a life of heroism to atone for his past mistakes.

Plagued by many vices, Stark is prone to womanizing, pride and most surprisingly, alcoholism. This lifetime of troubles has caused him to develop a cynical view of the world. Despite this, Stark is devoted to truly make the world a better place.

Iron Man is a hero that relies on his intellect and technological resources to defeat foes and achieve victory. Stark invariably prides himself on being one of the most intelligent people of the Marvel Universe.

As an upperclassman, Stark suffered from alcoholism. He drank almost on a regular basis.

With an intelligence classed as super-genius, he easily is one of the smartest people on Earth. Furthermore, this extends to his remarkable ingenuity dealing with difficult situations such as difficult foes and deathtraps where he is capable of using his available tools, like his suit, in unorthodox and effective ways, as an example: when he built the first Iron Man Armor in captivity.

Tony is known as a "futurist". He has stated that the way his mind works he can intuit the future.

Without his armor Tony Stark possesses a strength a little superior than that of a normal human, he also engages in moderate regular exercise. The armor amplifies Stark's strength to incalculable levels, enabling him to normally lift (press) roughly 100 tons. If sufficiently powered by an outside source, the armor can achieve massively higher levels.

Transportation: When not traveling in his armor, Stark owns a number of vehicles. Some of them have been modified, such as a Ferrari capable of flight.
Weapons: Various repulsor weapon systems by Iron Man armor

Retrieved from "https://marvelcomicsfanon.fandom.com/wiki/Anthony_Stark_(Earth-727)?oldid=256330"
Community content is available under CC-BY-SA unless otherwise noted.