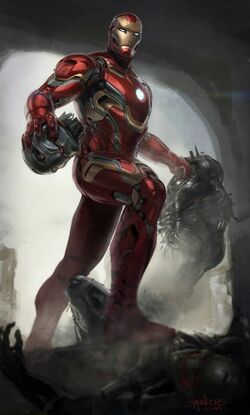 Tony Stark, Metal Man, Tin Man, The Da Vinci of Our Time, The Most Intelligent, Capable Person on the Planet, The Merchant of Death, The Mechanic, Howardson, Metal Man, The Legionnaire, The Futurist, The Savior, Ultron's Dad No. 2
Identity

Black
Unusual Features
Has an Arc Reactor implanted in his chest, which maintains his body functions (formerly), but was later removed from his body.
Status
Citizenship

Married
Occupation
Adventurer, Inventor, Industrialist, founder of the Maria Stark foundation, president emeritus of Stark Industries; former United States Secretary of Defense, CEO of Stark Enterprises, Stark Enterprises, Stark Solutions, Circuits Maximus & Stark International, computer technician
Origin
Origin
Tony Stark was born to parents Howard and Maria Stark. During a conflict in Afghanistan, Stark was captured by terrorists and, with a piece of shrapnel in his heart, was about to die. Constructing a suit of iron armor that would also help with his recovery, Stark broke out of captivity and journeyed back home to the United States where he built an advanced suit of armor and become Iron Man.
Place of Birth
Long Island, New York
First appearance
Last appearance
Modern Comics:
Dark Age Vol 1 1
Modern Comics:
Dark Age Vol 1 1

Before the years of Ultron Revolution, Iron Man seemed to have the same history with his Earth-61615 counterpart, except for one time where he met and had a brief relationship with a woman named Victoria Hand in which they unexpectedly had conceived a child together that he later named Edward, until his co-creation along with Hank Pym and Bruce Banner that was the rogue A.I. Ultron started an all-out war against humanity and those who dares to oppose him and his ideologies.

Days before the long-time war against Ultron ends, Tony and the rest of his Iron Legion were sent to lead in their final mission infiltrating the inside core of Ultron's Sanctuary. After the modest sacrifice of those who were willing to gave up their lives so that the others can successfully finish the mission, Tony was one of the others who made it towards the very end. During the infiltration on the Sanctuary, many superpowered individuals died, though some survivors such as Iron Man and Captain America manages to enter the core area of the Sanctuary and face the highly-upgraded and evolved Ultron, in the flesh.

The two faced the Supreme Ultron, and was able to get the upper hand after they finally used Hank Pym's special weapon on Ultron, revealing that only organics and Stark's repulsor tech could fully activate and use the weapon. Proving Pym's tech to be highly-effective, traces of Ultron's consciousness were quickly and surely erased from the Internet, turning off all of his sentries patrolling across the world in the process, keeping the battle within and outside the Sanctuary in the form of his remaining sentries and Ultron himself. The three continued to fight. After thinking a final way to end Ultron and the war, his fellow Avenger Captain America finally helped him to finally end Ultron once and for all, at the cost of his old friend's life. Immobilized, Ultron's consciousness, which was within his final main body, was finally destroyed into pieces by his second creator, ending Ultron after his decade of global genocide and obliteration, something that the devious and diabolical machine still believes were ways in achieve the very peace he had always envisioned.

Although the war had ended by the 2020s, Tony had suffered from post-traumatic stress disorder due to the events of the long-time war, leading him to recreate and reprogram the Iron Division to safeguard the world and eventually, help him retire in the near future to live with his loving wife Pepper Potts, with his rebellious and stubborn son, whom his allies and enemies would later know how loyal and dedicated Edward was to his maternal bloodline.

Still feeling depressed, regretful, and traumatized about the tragic events of Ultron Revolution, Tony decided to frequently visit the Heroes' Memorial Cemetery at New York City, in order to pay his respects to each and hero and each redeemed villain who sacrificed their lives to achieve freedom and hope for humanity once again. Instead of returning home, he instead goes to his old mansion back in Malibu, California the day after, revisiting his old workshop and remembering when he was still some kind of a rich, playboy billionaire, still trying to master his crafted Iron Man armors as a young adult.

As he searches through his old basement, he suddenly found out that some of the computer systems are still functioning after trying to turn it on. Unusually, as he searches through his old files, he noticed something strange since there were new files inside the computer that wasn't there at all, when he finally moved out of the mansion. Digging through these files, Tony unintentionally opened a program which suddenly powered up the generator back up inside the workshop, revealing some strange, unfamiliar discoveries. After the program activated all of the Iron Man Armor storage, he noticed that some of the suit containers weren't filled with Iron Man's old suits, but now, it's replaced by old, damaged Ultron Sentries, which definitely had surprised Tony, thinking how did those get in there in the first place.

As he gets closer to investigate the Sentries, he noticed another eerie detail about the machines, revealing a Hydra emblem on each of their right shoulders. But before he could anywhere closer to investigate further, the Sentries' eyes suddenly glowed, and started to attack Tony without any function of stopping. Luckily, Tony was wearing his Iron Man suit all along, a version similar to those of the Bleeding Edge's. As the battle rages on, Tony would most likely gain the upper hand on taking them out by ease. Unfortunately, things went south for Tony, after the Sentries showed they were no ordinary Sentries, revealing themselves to have the same body composition similar to Tony's suit, which was known as Nano-Machines, making easier for them to reform once damaged. Tony was on his last stand, as the battle lasted with the Sentries having the advantage on ripping Tony apart, both him and the suit, until Tony had no other choice, but to do his last resort. Tony activated the launch codes of the explosives secretly implanted around the entire the mansion since the beginning. Tony was tragically and painfully impaled by one Sentry as he tries to activate the codes, though it didn't stop him from there.

The entire mansion blows up, leaving no signs of survivors, until many people around the neighborhood saw a beam of light flying that came out the burning mansion, before it immediately crashes to the ground, revealing to be Tony himself. Though he might have survived the explosion, he suddenly started feeling weaker and dizzier, causing for him to lie down on the ground once more, seeking the attentions of the residents who were living on that neighborhood. After a few minutes of calls from emergency hotlines, they finally arrived with Tony's wife, Pepper and his son, Edward. Before they could even have their last moments with him, Tony sadly loses it, and with his dying breath, he uttered the words: "What... a... life..." as he scoffed and smiled, before finally succumbing to his critical injuries.

Realizing it was already too late, Pepper and Edward grieved Tony's lifeless body. Days later, Tony was buried at the Heroes' Memorial Cemetery, where he had last visited. All of New York City mourned Tony, as he became one of the most legendary men of all time in history. Tony's closest friends and the authorities alike even started an investigation towards Tony's death and who might've been responsible for his death, though they never found anything, not until later events came, concluding his cause of death as a "human error" on the Sentries in the meantime. Throughout so many years, Tony proved himself that he wasn't just a playboy, party-goer, billionaire, but proved that he was something much more than all of those traits. Tony Stark was the legendary Iron Man, and the world won't ever forget it through praising him as one of the greatest heroes there was, to the point that most of them would go to lengths forget or would even deny the fact that Stark was one of Ultron's three creators, suppressing the whole painful, harsh truth and instead focusing on the best aspects of his heroics.

More unfortunate for Stark, the future of the very has always been vowing to protect would eventually be ruled by an tyrant and deceitful organization known as H.A.M.M.E.R. (in the guise of S.H.I.E.L.D.'s and the previous government's new replacement), the new reincarnated system of Hydra, which was incidentally founded by his delusional and rebellious son, Edward Stark, who rose into power as the Vice President before taking over the position of their President Thaddeus "Thunderbolt" Ross, deeming to build a new world order in society. Building a global Empire, H.A.M.M.E.R. aimed to restrict freedom and establish the distorted version of peace through terror and security across the globe, as Hydra had always envisioned to achieve since its foundation becoming a reality through Edward Stark.

As a result, Tony's once godly image was tainted once more because of his son's innate deviance, and the situation even got worse when Edward began to synthesize don his own version of the Iron Man Suit, shamelessly changing the brand of his father's heroic image of inspiration into a symbol of terror and subservience. Freedom through retaliation against Edward Stark's global Empire wouldn't even be achieved until the next five years came, as some of Stark's surviving allies throughout the nation came to band together and unite as a Resistance. Tony's best friend, Rhodey, honorably succeeded his best man as the true spirited version of Iron Man, after finding a dated recording of Tony, which revealed to Rhodey that the former himself had already prepare a contingency protocol in case of something as catastrophic, or even worse than Ultron's attack happened once more, and he wasn't there to stop it, whether he's in another dimension or the worst case scenario, dead, which is a tragic reality that his allies have to live in and move on.

Retrieved from "https://marvelcomicsfanon.fandom.com/wiki/Anthony_Stark_(Earth-61616)?oldid=266714"
Community content is available under CC-BY-SA unless otherwise noted.