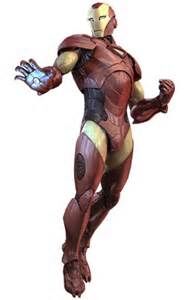 Little is detailed about Tony Stark's life before the great battle against Doctor Doom, however it can be assumed to follow much of the same path as his mainstream counterpart shortly after the Decimation of the Earth's mutant population.

In this universe, Stark Industries and S.H.I.E.L.D. had a recent falling out due to Stark, for personal reasons, stopping the development of weapons for the organization. Unable to cope with this, S.H.I.E.L.D. filed lawsuits against Stark for contract breaching, while secretly tampering with his tax contributions, making him lose more money than expected in the process. Eventually, Stark won the cause.

After Dr. Doom's attack to the S.H.I.E.L.D. Helicarrier UNN Alpha, Nick Fury felt the need of finding a new headquarters for the large team of heroes that was assembled for the occasion, since the Helicarrier sustained too much damage to serve as a base. In spite of their late differences, Tony offered Stark Tower, since it had plenty of facilities to supply the team's needs. He was also responsible for bringing in Hank Pym and Vision for technical support, as well as Wyatt Wingfoot to serve as the team's pilot.

All through the journey against Doom, Iron Man fought many of his old foes, like Crimson Dynamo, M.O.D.O.K. and Mandarin.

What is presumably one year after Dr. Doom's defeat Iron Man joined Nick Fury's Secret War on Latveria. A year after that Latveria retaliated and attacked New York. The attack was stopped and as Iron Man and Captain America were busy clearing up the in the aftermath, Nick Fury appeared and explained that the attack was his fault and that he was going into hiding. In a fit of rage, Iron Man blasted Fury who turned out to be a life model decoy. After the Stamford incident, Stark became leader of the Superhuman Registration movement and battled Captain America's Anti-Registration movement.

The Pro-Reg heroes & S.H.I.E.L.D. created a plan to ambush White Star at the Geffen-Meyer Chemicals plant. It was then that the nanite network gained sentience (and became the Fold). The available Thunderbolts were forced into planting bombs that ran on timers, thus blowing up the plant. After that failure, Tony was contacted by Nick Fury about the truth of the explosion. However the network make it seem that the villains were under S.H.I.E.L.D.'s control the entire time. This made Iron Man refused to listen to Fury. White Star initiated a jail break on Prison 42, causing the captive supervillains to be released as well as the Anti-Reg heroes. The Fold started abducting superheroes to make them part of the collective. This forced Cap & Iron Man to join forces to defeat the supervillains. After Prison 42 self-destructed, the Fold somehow survived. However they were defeated in Iceland.

After the defeat of the Fold, Congress opted to modify the SRA so that superheroes' identities won't be public and won't be forced into mandatory police services. After several months, Iron Man (joined by Captain America, Spider-Man, Thor) is chasing down the Wrecking Crew throughout New York City's subway system. The squad come across Skrulls along the way. After the Wrecking Crew's defeat, the incapacitated Skrulls are taken to the Raft for interrogation.

The UA receives intelligence on a Maggia operation in downtown Manhattan The intel itself was gathered by symbiote superhero Toxin. However, unlike last time, Toxin has managed to escape and now a UA squad (Iron Man, Living Laser, Storm, and Thor) is sent to help. Arriving to the Maggia op's location, the squad fights its way through the Maggia forces. Back up arrives in the form of a New York Police Department patrol lead by Stan Crater & Jean DeWolff. But the Maggia sends in Shockwave & Force are sent in. Fortune smiles when another Sinister Six member stumbles across the fiasco of gunfire, this one being Electro. The battle ends with UA confiscating several of the crates of weapons being loaded onto trucks, the Maggia escape with the rest. What's inside is the twist, the crates contained the weapons in the S.H.I.E.L.D. transports a few weeks back; meaning, of course, the Maggia have been infiltrated by the Skrulls as well (Shockwave & Force were also Skrulls).

About 4 weeks pass, and a Hammer Industries facility is attacked by what appears to be Stark's old enemy the Crimson Dynamo. Captain America, Winter Soldier, Iron Man, and Whirlwind are sent in to investigate. Upon arrival, the team makes their way to find Dynamo interrogating Justin Hammer on the progress of the updated Dreadnoughts. Hammer says the company finished the prototype, and that it's kept in storage. Dynamo notices the heroes, incapacitates Hammer, and taunts them as he races towards the storage area of the facility. Dynamo beats the team to the Dreadnought, but Iceman arrives with Valentin Shatolov (without his armor). This comes to no surprise that the "Crimson Dynamo" raiding one of Hammer's weapons facilities is in reality, a Skrull. The Skrull activates the Dreadnought, and leaves as he downloads the blueprints for the Dreadnought prototype into his armor. The prototype manages to injure Iceman before it is destroyed. The team finds the Skrull on the roof of the building, and proceeds to attack. Before his defeat, the Skrull manages to send the blueprints to wherever the Skrulls managed to set up shop on Earth (which was what he was doing on the roof). Since the UA destroyed his old one: Shatolov builds an upgraded version Crimson Dynamo armor, and forms a truce with them. Some time afterward - not wanting Stane Industries to go out of business from the Skrull's conquest of Earth, Iron Monger decides to join the Ultimate Alliance (much to Iron Man's discontent).

Retrieved from "https://marvelcomicsfanon.fandom.com/wiki/Anthony_Stark_(Earth-6109.2)?oldid=256263"
Community content is available under CC-BY-SA unless otherwise noted.