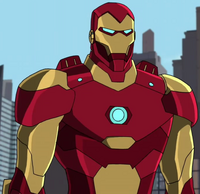 Da Vinci of our time
Identity

In Afghanistan, Tony Stark was kidnapped by the Ten Rings, who forced him to build a missile. He lied to them, instead building an armored suit. He mourned the death of Ho Yinsen, and was able to escape from Afghanistan to America.

At the end of the Battle of New York, he launched a missile at Thanos' base. He also saved the world from A.I.M.

He failed to disarm the bomb which caused the death of the Hulk. He rallied the surviving Avengers in battle, later mourning the loss of Bruce Banner.

The same as his Earth-616 counterpart.

Retrieved from "https://marvelcomicsfanon.fandom.com/wiki/Anthony_Stark_(Earth-609)?oldid=252267"
Community content is available under CC-BY-SA unless otherwise noted.