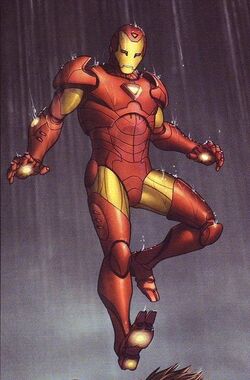 Single
Origin
Origin
Long after being abducted by terrorists and forced to build the Iron Man armor, Stark has become a traitor to the Avengers.
Creators

Equipment: Tony has no powers, but they are derived from his Iron Man armor(s).
Transportation: IM armor, Avengers' Quinjets
Weapons: None known.

Retrieved from "https://marvelcomicsfanon.fandom.com/wiki/Anthony_Stark_(Earth-227)?oldid=136303"
Community content is available under CC-BY-SA unless otherwise noted.