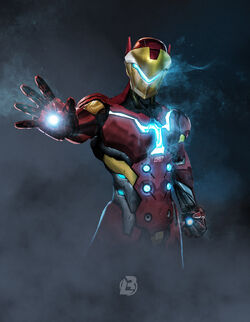 I'm the face of the future. I refuse to die in North Dakota!

Tony Stark inherited his father's company and massive wealth at the young age of 16. He quickly became famous as a weapons manufacturer and war profiteer, as well as a kind of shallow and douchey playboy. Your typical billionaire.

However, after Tony was abducted by the terrorist group known as the Ten Rings and tortured using his own technology, Tony had a change of heart. He built himself a suit of armor in order to escape, and vowed to destroy all of his weapons being used to harm innocent people. Eventually he was dubbed as the Iron Man by the media who reported on his actions as a vigilante.

He became inspired by the public's perception of him and revealed his identity to the world, quickly taking on a role as one of Earth's most forefront superheroes. He would later go on to team up with other popular heroes, Thor, Ant-Man and the Wasp, as well as the monstrous Hulk to save the world from an alien invasion of Kree Sentries.

For the next few years, the Avengers recruited other heroes including the World War 2 hero Captain America and the mutant twins Quicksilver and Scarlet Witch. Eventually, one year on Christmas Eve the Avengers discovered a plot by Loki and the Red Skull to utilize Bifrost energy and exterminating half of all life on the planet.

The Avengers tracked their Vibranium Bifrost machine to the small town of Stanley, North Dakota, which had been completely taken over by Hydra. While Captain America led the fight against the armies, Iron Man was accompanied by Thor and Ant-Man to try and dismantle the Bifrost. They were able to downsize the blast radius to 10 miles, but the vortex was destabilized after interference by the Scarlet Witch. Each of the Avengers were sucked through the Bifrost before a dimensional explosion, leaving their fate unknown.

Retrieved from "https://marvelcomicsfanon.fandom.com/wiki/Anthony_Stark_(Earth-2266)?oldid=255925"
Community content is available under CC-BY-SA unless otherwise noted.