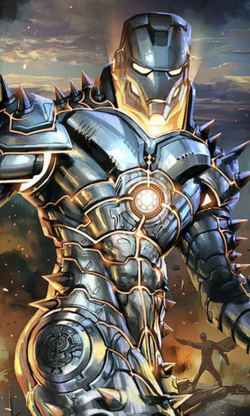 I always knew one day I'd end up inseparable from my armor... but I never quite imagined it like this.

Tony Stark became the superhero Iron Man after he was kidnapped by the Ten Rings and forced to build weapons for them. From then on, he became one of the world's most forefront protectors, and was even the leader of the Avengers for a time.

However, when the Order of the World Tree launched their attack on Earth, Iron Man had his arc reactor destroyed, which nearly killed him and severely drained his physical body. Tony was taken to the remains of Nidavellir by some of his teammates, where they teamed up with Eitri the Dwarf to forge a new Destroyer Armor to house Tony's consciousness. Thus, the Iron Destroyer was born.

Retrieved from "https://marvelcomicsfanon.fandom.com/wiki/Anthony_Stark_(Earth-2001)?oldid=260898"
Community content is available under CC-BY-SA unless otherwise noted.