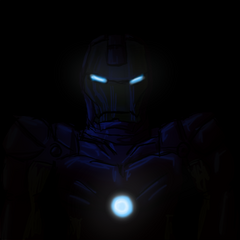 The Consultant The Da Vinci Of Our Time, Merchant of Death, The Mechanic
Identity

Black
Unusual Features
Arc reactor powers an electro-magnet on his chest that prevents the shrapnel from going deeper into his heart.
Status
Citizenship

Single
Occupation
Inventor, adventurer, industrialist, founder of the Maria Stark Foundation; Chairman, and electrical engineer of Stark Industries
Education
Phillips Academy, Andover, MA (1977-1984)
BS, Engineering Massachusetts Institute of Technology, Cambridge, MA (1984 - 1987)
Origin
Origin
A billionaire industrialist who is captured by terrorists in Afghanistan. Ordered to build a missile for them, Stark uses his resources to build a suit of power armor and make his escape instead. Returning to America, Stark improves his armor and becomes the technologically advanced superhero Iron Man.
Creators

Tony's history is the same as that of his Earth-199999 counterpart up until the events of the end of Iron Man 3.

After training a kid he proclaimed to be the next him. The next Avengers member, he proclaimed him Iron Mind. Training him to be a great hero. He was later caught when he turned bad. At the Avengers Academy graduation, he killed all of the heroes and civillians there. It was liek he bombed it. He worked with Hydra and put Tony in depression. The deaths caused all of the Avengers to come out of retirement. Anthony would then lead The Legion with the other Avenger members. Soon, he would turn his back on the world after being mind tricked by Neuroo. He would side with the evil. It would mark the beginning of Dark Iron Man. He gave up S.T.A.R.K. Industries to Norman Osborn and would co-lead it with him.

Many people in the media think that Tony Stark is just an egocentric playboy. But It is shown throughout the series that Tony does care for people, especially his friends. Although he causes trouble on occasion, he is more than willing to make up for his mistakes, which is also why he became a superhero. Charming, brilliant, cocky, Tony is a classic playboy. His wealth, power and natural charms allows him to get just about any woman he wants. But despite his rather carefree and overly confident personality, inside his heart lies loneliness as Ho Yinsen pointed out, 'A man that has everything, but has nothing'. That all changed when he turned his back on the world, people felt they were betrayed and hate his guts now.

Even though he can appear to be self-obsessed, Tony can also be a great friend and occasionally shows affection toward his teammates. Tony was the only Avenger who encouraged Bruce Banner to embrace his identity of Hulk as a bless rather than a curse, and trusted him to make good use of Hulk's powers. And when Tony was caught up by the terrifying vision of scarlet witch, he was possessed with great fear of losing all his friends. During battle, he tries his hardest to protect his allies, risking his own life if he has to.

Tony is also known for being very intelligent, having built an Arc Reactor from scratch in Afghanistan. His intellect has gained him the name "The Da Vinci of our Time". Due to a strained relationship with Howard Stark] he grew to have a deep disrespect for figures of authority.

Before his kidnapping, Tony was a self centered, arrogant person who didn't care for many people. During the following years, Tony has matured, becoming more of a team player and becoming less arrogant. He even began opening up and having a real relationship with Pepper Potts. After the Battle of New York, Tony developed a strong fear, that in this new world of "gods" and "aliens", he would be unable to protect the ones he loved and he grew to become paranoid and full of anxiety.

But even after starting a new life as supervillain, his showy personality has big changes. As shown in rendering the Iron Man suit with red and blu3, revealing his identity in public even though he was told not to. Tony also has a liking towards heavy metal and rock music groups like Black Sabbath, AC/DC, and Queen.

Tony has no inherent powers, however the arc reactor that was in his chest provided a source of power with which he can power high-demand equipment, most notably his series of Iron Man armor suits, the energy output of the reactor when it run on palladium was 8 gigajoules per second. Iron Man's primary powers come from his Iron Man armor.

Super-Genius Class Intelligence: Tony Stark is a genius inventor capable of conceiving and building technological advancements far ahead of cutting edge technology. Among his achievements are the miniaturized arc reactors that his father conceived, the J.A.R.V.I.S. artificial intelligence, his Iron Man armor suits, and various advanced weapons technologies. He also has knowledge of Spanish, Italian and Mandarin.

Trained Combatant: Stark was trained in unarmed combat by Happy Hogan and has become quite physically formidable on his own when the situation demands it.

Without his armor Tony Stark possesses the normal strength of a normal human man his age, height, and build who engages in moderate regular exercise. The armor magnifies Stark's strength to superhuman levels, being able to lift up to 3 tons.

Obsession: Stark has an obsession with not wanting to be personally handed things by people other than his close friends. Business cards, legal documents, and other sundry items all get intercepted or redirected to others close to him.

Arc Reactor Dependence: Stark has shrapnel embedded in his chest and is reliant on an electromagnetic implant powered by an arc reactor to keep him alive. The removal of it could cause his death in a matter of minutes. The early generations of this reactor were slowly poisoning him with the palladium leaking into his bloodstream.

Posttraumatic Stress Disorder: Following the Battle for New York, Tony suffered from post-traumatic stress disorder (PTSD). The mention of "New York" (as a term synonym of the Chitauri invasion) could trigger anxiety attacks. He also suffered from paranoia, believing that a danger similar to the Chitauri invasion was imminent, for which he isolated himself in his workshop for long periods of time creating new Iron Man suits. His mental illness also prevented him from proper sleep cycles, going as far as being awake for 72 hours before taking a nap, prolongued sleep could make him experience nightmares.

Transportation: When not traveling in his armor or using a Quinjet as an Avenger, Stark owns a number of conventional vehicles.
Weapons: Different Iron Man armor, and different hand-held weapons of his making.

Retrieved from "https://marvelcomicsfanon.fandom.com/wiki/Anthony_Stark_(Earth-1210)?oldid=152458"
Community content is available under CC-BY-SA unless otherwise noted.