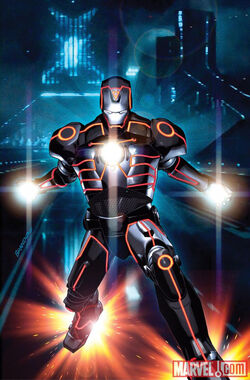 No Hair, formerly Black as a human
Skin
White
Unusual Features
Anthony has become a being of pure repulsor energy.
Status
Citizenship

This is power to the people... on a whole new level!

Tony was born from the incredibly wealthy Stark family in upper New York. His father is a former weapons manufacturer and his mother is a worldwide known fashion designer. How ever, when Tony turn 10, his parents got divorced when Howard was involved in a secret affair with his secretary Sofia. Even though Howard married Sofia, Tony showed little respect or attention to her and his father for that matter, focusing on his studies harder than ever before, since his mother always encouraged him to use his smarts for the better of humanity. Just when he joined college, Howard divorced Sofia and married a third time, this time with his overseas associate, Venezuelan Oil tycoon Sandra del Valle. Their marriage also included Sandra's daughter Adriana, who was a prominent name in the technological field.

Tony found a rival of wits and intellect in his stepsister, which pushed him further to his goals. Right after he graduated from college, he was granted access to the family fortune, since that was something Tony had to earn by himself. Tony's goal finally had the final ingredient for success, the monetary funds to form Stark Industries

In the lapse of three years, Tony molded Stark Industries into the epitome of greatness. Every single technological advance was made with Stark Industries tech, quadrupling Tony's fortune in comparison of even his parents, which led him to create his most ambitious project, the Arc Reactor, a clean perpetual energy system that provides full power to an entire city for ten years. The Media was so agast, that they gave Tony the nickname of "Scientist Supreme".

Tony was planning to do a full scale exhibition of the Arc Reactor to the public, but before the exhibit, one of Tony's rivals, Justin Hammer, managed to access the Arc Reactor configuration in order to sabotage it. Once Tony's Arc was activated, the energy was increasing enormously, reaching peak levels in seconds, just to start losing control. Tony tried to contain it as much as he can, but the energy was too much to control, which forced him to go for manual shutdown, but the system is too close to the reactor. Once Tony reached the switch, he realized that such an amount of energy wouldn't have any focal point to go and instead it would spread over the city, on the risk of a citywide power blackout. With no time for a major solution, he risked his life to attempt to divert the energy with his own body,resolving that the static energy of the human body should become a focus point so he can divert it to the sky. Miraculously, Tony managed to shoot most of the energy through the sky, but the remaining energy got condensed within his body, making him a being of pure energy

After the accident, Tony ordered his team to modify the arc reactor so it can contain him, and he won't become a danger for the rest of the world. The accident went public, making his company hit a low point in the stocks, but it also reached the eyes and ears of S.H.I.E.L.D. Director Phil Coulson and Captain America who wanted to talk with Tony, but knowing the danger that it would imply being near an energy being, they decided to appeal to Tony's humanity by reaching out through the only man they know he might trust: his father. It turns out Howard was one of the pillars of U.S. Government's high tech weaponry, which also includes near 90% of all the weaponry S.H.I.E.L.D. uses. Howard was asked to talk to his son and accept their help, but Howard is hesitant due to the distance between him and his son.

Howard went to the arc reactor where Tony is contained, and tried to reach out to him only to receive silence, but before he left, he talked about why he felt his son resented him and acknowledges that he wasn't the father Tony deserved, even revealing that while he divorced Mary-Helen due to his work, he divorced Sofia because she wanted to get rid of Tony and Sandra is in the process of divorcing him because she found out about his past as weapons manufacturer. He regretted never spending the time to appreciate Tony's accomplishments and in spite of everything he's proud of what his son has done.

Tony reached out to his father and apologized for the resentment and recognized that he always looked up to him for his determination. Howard decided to give his assistance to S.H.I.E.L.D. to help Tony as long as he supervises the procedure, which Coulson complies.

Howard's plan to help Tony involved a discarded project Howard planned years ago called "Iron Armor", a powerful suit of armor which enhances the human capacities in battle, but it was shelved when Howard failed to find a reliable and stable energy source powerful enough to power up the suit and the laser systems, but realizing that Tony's arc reactor perpetual energy flux is the missing key, the suit can help Tony leave the containment room. With Howard's instructions, Tony assembled the suit onto himself and two weeks later in a burst of energy, Tony emerged from the arc reactor wearing the Iron Armor. The high tech suit finally made Tony be partially free, but he still feels bad for being unable to interact like before, but at least he now has a chance to do things right.

After the incident was over, Steve Rogers approached Tony to recruit him into the Avengers. Tony was hesitant about it since he doesn't want to become a government's weapon, but Steve's argument that he now carries on the same power he was going to provide to the people, he now can help them in another way, defending them from higher threats, which Tony replies that is a different way of the "Power to the People" approach he attempted with the arc reactor, making Tony accept Steve's proposal to join the Avengers. As an act of good faith, they give Tony and Howard all the information about the arc reactor sabotage, revealing that the perpetrator was Justin Hammer, a rival technology manufacturer, but Coulson reveals that he worked under the employment of a major rival who turns out is his soon-to-be ex-stepsister Adriana.

Energy Displacement: Due to Tony's entire body becoming pure energy, Tony can redirect it to protect himself, attack his enemies or even maintain a solid stable form within the Iron Armor.

Due to Tony's active involvement with the Iron Armor, his energy decreases as much as he keeps using the repulsors, therefore he must be recharged before and after every battle.

Iron Armor: The Iron Armor is made with the major purpose of keeping Tony safe and avoid his energy to disrupt out of control, but it also contains repulsor technology powered by Tony's energy, which can reach the power enough to blast a ten story building in one shot or cut with precision a lock with a tiny beam.

Retrieved from "https://marvelcomicsfanon.fandom.com/wiki/Anthony_Stark_(Earth-120986)?oldid=55867"
Community content is available under CC-BY-SA unless otherwise noted.