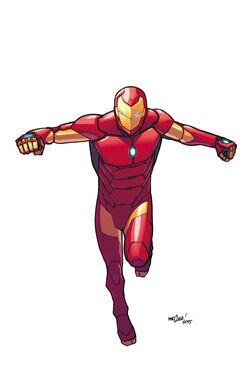 Following is not really my style.

Tony Stark, genius, playboy, billionaire, philanthropist, and the CEO of the multibillionaire company Stark Industries, Stark traveled to Afghanistan to supervise a field test for one of his weapons. During the demonstration, he and some others are ambushed by the war cartel of the Mandarin, the Ten Rings, and are taken under captivity. Stark and his accomplice Ho Yinsen are suppressed by the organization to build arsenals and weapons for them.

Knowing they would never keep up their end, Stark and fellow captive Yinsen instead made a plan to escape. In order to improve Stark's condition, he and Yinsen created a miniature Arc Reactor, a smaller version of the power source previously invented by his father Howard Stark and Anton Vanko, which they embedded into his chest to supply energy to the electromagnet protecting his heart. Together, they secretly began building an armored suit to help them escape.

Soon the pair enacted their escape plan, however, the booby trapped door the pair had rigged with an explosive was set off. Yinsen realized that they did not have enough time to power the suit before the terrorists arrived. He took a gun and held back the terrorists, but was mortally wounded. With his last words, Yinsen reassured Stark that it would be OK to leave him behind and urged him not to waste his life. Angered by Yinsen's death, Stark stepped outside; the suit protected him from the onslaught of bullets, and he used the suit's flame-throwers to kill several terrorists, destroy their stockpile of Stark Industries produced weapons, and escape, though his suit was destroyed as he crashed in the desert.

Upon being picked up by the Air Force and returned to the United States, Stark met with Pepper Potts; he asked to first be given a burger, then called a press meeting. At the meeting, Stark finished his burger and declared that his company would, for the foreseeable future, no longer manufacture weapons. This move shocked the press, many declaring that he must be suffering from PTSD. His father's friend and business partner, Obadiah Stane, told him that this move was blocked by the board members shortly after, worried that the decision would ruin the company.

In the months that followed, Stark retreated from public view, focusing on improving the design of his new armored suit, refining its size, movement, and flight capability. He asked Pepper Potts to help him take his old Arc Reactor out and to put in a stronger one that would be used to power his suits.

He eventually perfected the flight power after much trial and error and even mastered other features such as weapons inputs and other wide array of built-in optimizations. While in his suit, once, Stark saw a mugger in pursuit of an innocent lady. Using his suit of armor, Stark prohibits the mugger from doing any sort of crime. Realizing that his powers may be resourceful, Stark starts using his suit for stopping petty crimes. Eventually, after foiling the sinister plans of Obadiah Stane, Justin Hammer, Ivan Vanko and the Crimson Dynamo, Stark exploits his identity as the Iron Man to the public. Afterwards, Director Nicholas Fury of S.H.I.E.L.D approaches him for the "Avengers Initiative." Becoming a supervised crimefighter and also a businessman, Stark assembles with the Avengers and goes on many other missions.

After the massive scars left by "previous events" that shattered not only his world, but the universe itself, Stark creates a new and an advanced version of the Iron Man suit, that is capable of exerting mass damages, unlimited source of energy beams, extra battery, human olympiad like reflexes and other capabilities, the suit, the Renaissance armor, helped him come over the struggles and emotional disadvantages he had to face with other suits. Moreover, this suit of his could be controlled by JARVIS for crimefighting whenever he was attending other important matters.

Realizing that he did not spend sufficient time with his fiance Pepper, Stark put JARVIS on control of his Renaissance suit during an Avengers protocol (breaking the golden law of immediate response to a distress call) and went on an outing with her. Returning home to his mansion, he is surprised when he sees there is a child inside his mansion watching a show on Stark's television. Stark then discovers that the child is his, Arya Stark. Pepper is enraged as to why he never told him that he had a child, but Stark replies that he never knew he had one. The child does not get along well with Stark, only interested in his suits and his inventions. Stark also discovers that the child is of a woman he just had a "fling" with, Maya Hansen, and since she could not support the child anymore, she was bound to hand over Arya's parental support to Stark.

Stark allowed Arya in due time to enter his laboratory and help him during inventions and during experiments but limited Arya to these set of opportunities. However, Arya rebelled against him and tried to mess around with the Iron Man suits. She unintentionally activates the Renaissance Armor "sentient mode" which starts causing turmoil and damage around Stark's mansion. Stark returns home from work only to see the massacre going on. Without his Iron Man armor, he defends his child and saves her with destroying the suit even when a missile barrage targets him. This is when Arya gets along with his dad and decides to obey him (though later she does not, however, she just gets along with him). Later, we get to know that this was all a part of Stark's destructive but elaborate plan. He was secretly observing Arya because he wanted to know what she would do if he was not home, and that suit of armor was just a duplicate of the real Renaissance armor and about the damages in the home? He's a freaking billionaire.

Many people in the media think that Tony Stark is just an egocentric playboy. But it is shown throughout the series that Tony does care for people, especially his friends. Although he causes trouble on occasion, he is more than willing to make up for his mistakes, which is also why he became a superhero. Charming, brilliant, cocky, Tony is a classic playboy. His wealth, power and natural charms allows him to get just about any woman he wants. But despite his rather carefree and overly confident personality, inside his heart lies loneliness as Ho Yinsen pointed out, 'A man that has everything, but has nothing'.

Even though he can appear to be self-obsessed, Tony can also be a great friend and occasionally shows affection toward his teammates. Tony was the only Avenger who encouraged Bruce Banner to embrace his identity of Hulk as a blessing rather than a curse, and trusted him to make good use of Hulk's powers. And when Tony was caught up by the terrifying vision of Scarlet Witch, he was possessed with great fear of losing all his friends. During battle, he tries his hardest to protect his allies, risking his own life if he has to.

Tony is also known for being very intelligent, having built an Arc Reactor from scratch in Afghanistan. His intellect has earned him the name "The Da Vinci of our Time". Due to a strained relationship with his father, he grew to have a deep disrespect for figures of authority.

Before his kidnapping, Tony was a self centered, arrogant person who didn't care for many people. During the following years, Tony has matured, becoming more of a team player and becoming less arrogant. He even began opening up and having a real relationship with Pepper Potts. After the Battle of New York, Tony developed a strong fear, that in this new world of "gods" and "aliens", he would be unable to protect the ones he loved and he grew to become paranoid and full of anxiety.

But even after starting a new life as a superhero, his showy personality has never changed- as shown in rendering the Iron Man suit with hot-rod red and gold and in revealing his identity in public even though he was told not to. Tony also has a liking towards heavy metal and rock music groups like Black Sabbath, AC/DC, and Queen.

Tony Stark does not possess any superhuman powers. He used to have a scaled-down miniaturized version of the Arc Reactor that keeps the remaining shrapnel in his heart from killing him. However, after having the shrapnel removed, he no longer needs the Arc Reactor in his chest. Nonetheless, his high-tech battle armor provides him with superhuman strength, endurance, durability, and a variety of onboard weapons. Combined with his extraordinary intelligence, it makes Tony Stark one of the most formidable superheroes on the planet and a force to be reckoned with.

Genius Intelligence: Tony Stark is a genius inventor capable of conceiving and building technological advancements far ahead of cutting edge technology. Among his achievements are the miniaturized arc reactors that his father conceived, the J.A.R.V.I.S artificial intelligence, his Iron Man armor suits, and various advanced weapons technologies. He is also multilingual.

Without his armor Tony Stark possesses the normal strength of a normal human man his age, height, and build who engages in moderate regular exercise. The armor magnifies Stark's strength to superhuman levels, being able to lift up to 3 tons.

Arc Reactor Dependence: Stark had shrapnel embedded in his chest and is reliant on an electromagnetic implant powered by an arc reactor to keep him alive. The removal of it could cause his death in a matter of minutes. The early generations of this reactor were slowly poisoning him with the palladium leaking into his bloodstream.

Alcoholism: Tony has been battling against his alcoholism due to the high pressures of running his industrial company, maintaining his social profile, and being Iron Man. More recently, he started to drinking again when, because of the Serpent arrival on earth, he believed it was the apocalypse.

Transportation: When not traveling in his armor or using a Quinjet as an Avenger, Stark owns a number of conventional vehicles.
Weapons: Different Iron Man armor, and different hand-held weapons of his making.

Retrieved from "https://marvelcomicsfanon.fandom.com/wiki/Anthony_Stark_(Earth-1028)?oldid=152457"
Community content is available under CC-BY-SA unless otherwise noted.