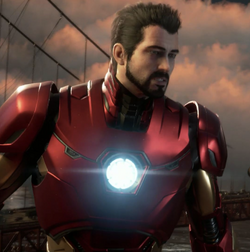 Tony, The Iron Destroyer, The Merchant of Death
Identity

Everyone says changing the future is impossible. Well, pulling off the impossible is pretty much all I do these days.

Tony Stark is the son of genius tech mogul, Howard Stark, and Howard's nanny's daughter, Maria. Growing up, Tony's father was cold and distant, but he always had a very warm and loving relationship with his mother. He showed signs of being a genius at a very early age and got into MIT at the age of 15. A few years later, when he was 19, his parents were assassinated by the Hydra Agent the Winter Soldier, who covered it up to look like a car crash.

Now orphaned, Tony became the sole owner of Stark Industries, and became the world's top weapons manufacturer. He also developed something of a carefree playboy lifestyle to cover up the pain he felt inside. He eventually became good friends with the army Colonel James "Rhodey" Rhodes after selling to the army for a few years.

One day while making a presentation to the army in Afghanistan, Tony was ambushed and kidnapped by the terrorist organization the Ten Rings, run by the shadowy figure the Mandarin. When he woke up, he discovered a heap of shrapnel from one of his own warheads had lodged itself inches away from his heart and was quickly becoming infected.

Forced into building weapons for the Ten Rings, Tony instead built himself a mobile Arc Reactor to keep his heart beating, and proceeded to put together a suit of armor in order to make his escape.

After battling the Ten Rings and returning home after two months, he was reunited with Rhodey and his other best friends, his driver Happy and his assistant, Vicki. Tony had a change of heart while in captivity, and decided he was no longer comfortable profiting off of war. He continued to build armors with the help of his artificial intelligence, J.A.R.V.I.S., in order to destroy his weapons that had been distributed across the world.

Quickly becoming famous as the superhero Iron Man, Tony revealed his secret identity to the world and became even more of a celebrity. He was then almost instantly recruited by Nick Fury to join S.H.I.E.L.D.'s Avengers Initiative alongside other heroes like Captain America, Captain Marvel, Black Widow, Hawkeye, Thor, and the Hulk to fight against the Chitauri invasion led by Thor's evil brother, Loki.

After defeating Loki, the Avengers broke off from S.H.I.E.L.D. due to the controversy of the earth's mightiest heroes working for a secretive government agency. Since then, Tony and Vicki have begun a relationship and he has become good friends with Bruce Banner.

Later, Tony and his teammates, Captain America and Thor, found themselves thrust into the future where they discovered that Thanos had collected all six Infinity Stones, destroyed the Earth, and conquered the galaxy.

Returning to their own time, the Avengers became determined to prevent that future by any means necessary. As one of the prophecies included Stark Industries going bankrupt and getting bought out by Oscorp, Tony turned over control of the company to Vicki, opting to dedicate all of his time to the Avengers.

[[Category: In a Relationship with Vicki Potts Characters]]
Retrieved from "https://marvelcomicsfanon.fandom.com/wiki/Anthony_Stark_(Earth-101)?oldid=250668"
Community content is available under CC-BY-SA unless otherwise noted.