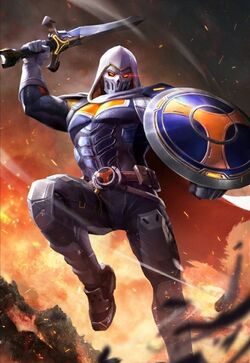 Tony? Who the hell is Tony? Call me Taskmaster...

Anthony "Tony" Masters was formerly in the U.S. Military and was one of the best agents the C.I.A. had to offer. He was able to finish every tasks faster than anyone else in his division. At one point, he was sent on a covert operation (secretly ordered by S.H.I.E.L.D., under the U.S. Government's authorization) in an attempt to resurrect the United States O.S.S. program previously by the J.I.O.A., formerly known as Operation Paperclip. During the mission, he and several other agents was sent to recruit several German scientists, engineers, and technicians (many of whom were formerly and were secretly registered members and leaders of the Nazi-based organization, Hydra, but was only told to the C.I.A. that it was only the traditional Nazi-Party and not the terrorist organization).

During one of their missions, Tony secretly discovered an old Nazi bunker after trying to recruit a former German scientist (secretly a Hydra scientist) in his home. In the bunker, he discovered a few hanging blueprints, some colored liquid contained in test tubes, which is revealed to be the serum similar to the Super-Soldier Serum; the same ones used by Hydra and the Soviet into brainwashing and turning soldiers, including Bucky Barnes into the Winter Soldier. After finding out, he immediately reported his findings to his fellow agents, but all of them were ambushed by several Hydra agents and all were shot and killed before they could apprehend the scientist except for Tony, but was still injured during the shootings, leaving him to be captured by Hydra. After vanishing for a year, C.I.A. had no other choice but to cover up his true whereabouts and reported to his beloved wife, Mercedes Merced, that his supposed cause of death was caused by a "human error," during their recent mission.

After waking up from his unconscious state, he realizes that he was strapped on a stretcher inside a classified laboratory. Tony tried to escape but the straps were to tightened and while attempting, he was approached by a man named Baron von Strucker and a mysterious woman, by the name of Viper, who told him about joining Hydra to become a more powerful super-soldier if he accepts joining their oath. Tony declined the offer and kept on cursing Hydra to rot in hell. Strucker and the Viper was disappointed in his reaction and before leaving, Baron tells him that he missed a great opportunity of a lifetime and taking this "treatment" very easily, making Tony to experience the harder way, by suffering a very long time as a consequence of his disobedience, before the ruthless experiment on him had just started.

The coincidental thing is that the experimentation on Tony was led by the former scientist who they had interrogated about earlier that day, during their earlier mission. As a result, Tony ultimately suffered after being subjected to surgery, steroid treatments, and other experimental treatment, both legally and illegally, supervised by the same Hydra scientists and researchers.

Tasks of a Master

For several moths, the series of experiment made on Tony made him gain some several extraordinary abilities, most notably the special ability known as "photographic reflexes." This ability enabled him to watch another person's physical movements and duplicate them without any practice, no matter how complex. He was previously a naturally gifted athlete who trained himself to superb physical condition. His power was only limited by the fact that the memories he gained by watching others overwrote his personal memories.

As a result, Tony forgot his wife, Mercedes and their daughter Jeanne, as well as his own history with the C.I.A. After the experimentation, he was unexpectedly fed and trained to fight by Strucker, given any weapon of his choice. She fought for some time, progressing strengthening until he was able to successfully complete every difficult task and assignment, Hydra had assigned and forced him to do. From time to time, Tony eventually became a deadly mercenary and an unstoppable force of Hydra, not to be reckon with, earning the fearful identity of the Taskmaster. The Taskmaster became a so-called "servant" of Hydra for over a year, until he came to a realization that he had no interest in any of the organization's motives, making him think of leaving Hydra by his choice, with or without their permission or notice whatsoever.

During the siege attempt of Hydra on infiltrating several S.H.I.E.L.D. facilities around the world in order to collect valuable samples and technology, Tony was one of the few high-ranking operatives who were chosen to lead his division unit in the mission. This made Tony have the opportunity and the chance to finally escape from the abusive clutches of Hydra, once and for all. Later, Tony and his entire division were assigned to infiltrate a secret facility and prison in New York City, near the famous S.H.I.E.L.D. headquarters, the Triskelion. They managed to infiltrate the facility in the stealthiest strategy possible, only to fail and get caught after Tony decided to trigger an alarm for his plan for escape, which finally got the attention of S.H.I.E.L.D. agents to defend it.

Tony was luckily successful in his plans as he avoided everyone's attention, fully deactivating the trackers that Hydra that implanted on him since, and finally escaped the ruined facility, leaving his men to either get killed or get arrested by the agents of S.H.I.E.L.D. in the following bloodbath. As a result of Tony's betrayal, Hydra's mission of infiltration in New York City unfortunately failed, disappointing the superiors, enraging Strucker in the process.

However, not all of Hydra's plans were a complete failure, as the actions of Tony disarming the alarms and triggers, were responsible to the escape of several super-soldiered criminals including the Green Goblin, Sandman, numerous terrorist mutants, and several more super-powered villains, who became prisoners inside the facility ever since they've been captured by the peace-keeping organization. The escapade of those individuals eventually formed the alliances and reunions of several groups around New York, such as the Sinister Six, A.I.M., and the Brotherhood of Mutants. Despite of all of this, Tony didn't care about the super-criminals' escape, for all he wanted to do was to get out of there and leave Hydra, nothing else. From that point on forward, the Taskmaster became a "lone wolf," searching for a "pack" to join to whenever he had to.

Eventually over the next few years, Tony's status as a lone wolf and ongoing passion mercenary for hire has come to an end when he was first tracked down in secret by the then-current director of S.H.I.E.L.D., Nick Fury, meeting the mercenary at a parking lot of the JFK International Airport, specifically in the aftermath of his mission of assassinating a gang of Hydra sleeper agents to prevent them from subsequently bombing the airport into ruins. Fury then comically greets Tony, thanking the mercenary for his non-stop "service" in the country, immediately getting into Tony's nerves and alerting him.

Preparing to execute Fury in front of him with one fatal move, the latter suggested for him to not do what he was going to do, informing Tony that he came to him with a peaceful formality with the intent of recruiting him in the peace-keeping organization for a one main objective, which was to help him and the heroes of the world deal with an upcoming global threat capable of wiping out current state of civilization as we know it by replacing it with the "new world order."

At first, Tony seemed sincerely uninterested, believing that he would be fine on his own even if the "world would crumble between his eyes," only to be convinced when Fury reminded him of his past life, claiming that he and S.H.I.E.L.D. were the only ones who knows what really happened to his family until then, something that he couldn't recall since he became the super-soldiered mercenary. Tony tries to threaten the agency director for taking advantage over him using his lost memories, but Fury actually came with a proof, showing him that he has a wife, who was still alive at the time, and also has now a young daughter, both who are still alive and well, unless they couldn't stop the upcoming takeover of the villanous emergence over the world that would be caused in the following days, by the Movement Alliance. Because of this, Tony finally agreed to Fury's offer, as he helps the heroes take down the Movement, in exchange for helping him restore back the memories of his past life.

Super-Soldier Treatment: Tony underwent extensive experimental treatments, including surgery and steroids, to become a genetically-enhanced "super-soldier," similar to those of Captain America's, only the difference is that his super-soldier abilities is less advanced than a normal one's, although it permanently enhanced Tony's bodily functions to beyond the peak of human potential.

The Taskmaster is not capable of duplicating a physical feat if the effort to do so requires superhuman effort. For instance, while he could view an opponent lifting a car, he could not do so because his body can't duplicate the superhuman strength required to do so. In the same way, he cannot duplicate any energy manipulating or projecting capabilities for the same reasons.

Retrieved from "https://marvelcomicsfanon.fandom.com/wiki/Anthony_Masters_(Earth-61615)?oldid=228273"
Community content is available under CC-BY-SA unless otherwise noted.