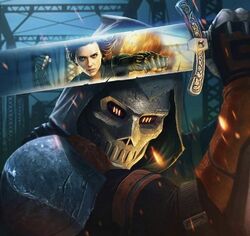 Anything you can do, I can do better.

Tony Masters was once a simple man. After retiring from active duty in the military, he settled down with his wife, Diane, and his son, Joseph, and got a job as a security guard at Stark Industries. He continued to work his way up until he became Head of Security. Unknown to anyone else, Tony had photographic reflexes and was capable of remembering and copying any move he'd ever seen.

Eventually, he became unsatisfied with his cushy job at Stark. He started to miss the feeling of adrenaline he felt while on active duty, and began getting himself involved with mob bosses. He was hired to rough people up and commit smalltime robberies. For a time, he felt alive, but it still wasn't good enough.

One day he woke up and took a look at his life, and decided to overhaul everything. He planted a bomb in his own basement, killing his family, and framing one of his former mob associates. He then faked his own suicide and raided multiple S.H.I.E.L.D. bases to arm himself as a mercenary.

It wasn't long until he had recreated himself as the Taskmaster, an assassin that lived in infamy, continually hired to do bigger and bigger jobs for clients like Hydra, and was even hired by Nick Fury to pull off a mission he couldn't risk S.H.I.E.L.D. Agents on.

Over time, the Taskmaster found himself coming into conflict with the Black Widow, who was the only person he'd never been able to beat in combat. His constant defeats by her inspired him to take on even bigger targets, and started planning attacks on multiple superheroes, like Iron Man, Spider-Man, and even the Fantastic Four.

With the Taskmaster's reputation slightly tarnished, he was desperate for some means of revenge. This led to him accepting an ongoing position as the top enforcer for the Advanced Idea Mechanics, and acting as Scientist Supreme George Tarleton's personal body guard.

After serving with AIM for some time, Taskmaster eventually jumped ship when the Avengers started cracking down on them following the Nevada incident. He went on the run, but was later apprehended by the Avengers. However, he was given the chance to use his abilities as a member of the Thunderbolts and earn a lighter sentence by serving the greater good.

Retrieved from "https://marvelcomicsfanon.fandom.com/wiki/Anthony_Masters_(Earth-101)?oldid=249541"
Community content is available under CC-BY-SA unless otherwise noted.