Start a Wiki
Ant-Man and the Wasp is a 2018 film taking place in the Marvel Cinematic Universe. It is a direct sequel to 2015's Ant-Man and stars Paul Rudd, Evangeline Lily, Michael Douglas, Michael Pena, Joel McHale, Danny Glover, and Kevin Durand.

After being freed from the RAFT by Captain America, Scott Lang returns to the home of Hank Pym and Hope van Dyne, where he learns that, in his absence, Hope has been working to reacquire Hank's technology as the new Wasp. Most of Hank's technology has been stolen by his former associate, Elihas Starr, who claims that Hank stole the Pym Particles from him. On a mission into the Quantum Realm to retrieve Hank's research from Starr, Hank and Hope come into conflict, disagreeing with each other's tactics. They are forced to retreat once they are ambushed by Eric O'Grady, a SHIELD agent turned into a government-sponsored Ant-Man by Elihas Starr. They discover that Starr is now partnered with SHIELD, and has used their help to open a safe portal into the Quantum Realm. However, energy from the Quantum Realm has transformed pilot David Cannon into a mutated superhuman, with the ability to generate high power winds. Starr prepares another voyage into the Quantum Realm, but when the portal explodes, Ant-Man and Wasp head onto the SHIELD Helicarrier to stop the crazed Starr, who refuses to close the portal. They eventually team up with Eric O'Grady, who helps them defeat David Cannon and close the portal, stopping Starr once and for all. Hank Pym is brought back into SHIELD, getting his own technology back. Scott Lang's prison sentence is shortened, and he is sent back to the RAFT, but not before he and Hope make their relationship official. SHIELD promises to help Hank Pym retrieve Janet, his wife, from the Quantum Realm, and Eric O'Grady is revoked of his Ant-Man title and instead given the suit and alias of Yellowjacket.

In a post-credits scene, Hank Pym opens a portal to the Quantum Realm, but instead of Janet emerging, out of the portal comes four astronauts who have been lost since the 60's: Reed Richards, Sue Storm, Johnny Storm, and Ben Grimm. They get the four out of their astronaut suits, but as Ben's helmet is removed, they are shocked to see that he has been transformed. 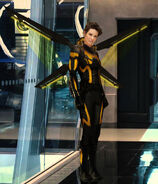 Whirlwind
Add a photo to this gallery
Retrieved from "https://marvelcomicsfanon.fandom.com/wiki/Ant-Man_and_the_Wasp_(ElectricMayhem)?oldid=212455"
Community content is available under CC-BY-SA unless otherwise noted.