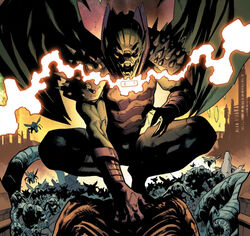 The Living Death That Walks, Lord of the Negative Zone, Annihilus the Annihilator, Nihil, Annihil Us, Squishable Bug
Identity

Annihilation Wave; formerly one of the partners of Thanos, and former member of the Cabal
Relatives
Annihilus is a unique entity.
Universe

Earth-61615
Base Of Operations
Annihilation World; Sector 17A of the Negative Zone
Characteristics
Gender

No Hair
Skin
Green
Unusual Features
Annihilus had an insectoid face and leathery bat wings (one of which was torn off), and though four-limbed like a human, both upper limbs divided at the equivalent of his elbows into two lower arms and hands, each hand possessing two talons and an opposing claw. Nihil was an extra-dimensional alien, with completely non-human internal organ structures.
Status
Citizenship

Only Annihilus is the death that walks, and feasts upon the power that one might possess...

Long ago in the Negative Zone, when the Tyannans, the only indigenous intelligent lifeforms inside the dimension at the time, have seeded life spores on barren planets, one of their ships got hit by a meteor and was sent onto the volcanic planet Arthros. Before dying from the devastating impact of the meteor, the last living members of the crew released spores. Many years later, one of the spores evolved into an insectoid creature. Due to a series of mutations reoccurring within the insectoid's genetic composition, he had a high intelligence.

Finding the wreckage of a Tyannan starship, he used an abandoned special helmet inside the ship to transfer all information about the advanced Tyannan technology to himself. This caused him to grow stronger and smarter, eventually gaining a "Cosmic Control Rod" and body armaments. By the time the creature was at the right moment into becoming one of the most intelligent beings in the realm of the Negative Zone, that insectoid creature finally became known as Annihilus, setting out to destroy anything that was a threat to his existence.

After gaining and enhancing his super-intelligence from time to time, he planned to conquer or destroy all planets near Arthros, before he eventually decided to conquer the entire Negative Zone's plane of existence all by himself, considering that goal a lifetime ambition. Other creatures came from the spores afterwards as well, but Annihilus used his mighty power and intelligence to rule above them, and used their special abilities in order to create a powerful army and grow as he gains slaves and followers, before calling it the Annihilation Wave.

When the Fantastic Four, one of the first heroic teams on Earth, visited the Negative Zone once again, Annihilus had finally detected their presence and sent out a hailing beacon to attract their attention. After the foursome's translation techniques proved ineffective, translating Annihilus' name as "Annihil Us", Annihilus provided them with his own translation devices (which, unbeknownst to the Fantastic Four, contained explosive devices). Collecting information on their home system, Annihilus then determined they were from a parallel dimension (the Positive Zone), which was younger and had a much longer prospective lifespan. The discussion was curtailed when Johnny Storm took ill and the four decided to leave. When Reed Richards and Ben Grimm informed Annihilus of this, he decided to kill them both and take their ship for himself.

Despite destroying their suits' integrity by detonating the translating devices he had attached to their helmets, Annihilus was single-handedly defeated by Ben, who managed to tear off one of Annihilus' wings during the fight, followed by beating him to death in the process for trying to kill the four. That was when the severely injured Annihilus dramatically reveals his Cosmic Control Rod, releasing a powerful blast of energy, knocking the four down from trying to get on a ship. While his rod's blast delayed Reed and Ben's escape, Annihilus was finally healed from his wound and managed to get on a ship in time, containing a large portion of the Annihilation Wave, and pursued the Fantastic Four on their way to their home dimension, the Positive Zone.

However, while Annihilus' ship was inside the portal's beam, already on their long way heading towards the opening portal on the other side of the Positive Zone, Earth, the Fantastic Four was miraculously able to catch up on time, riding their ship, chasing Annihilus in order to stop him from ever entering the Earth's plane. Only after a matter of seconds thinking of an idea to prevent Annihilus' arrival on Earth, Reed was able to come up with an idea that might not get keep Annihilus from entering the Positive Zone, but would definitely drive him out of the portal's beam and stop him from entering Earth. Agreeing upon this risky but probably effective idea, Ben and Johnny proceeded to enter the available escape pod, while Reed and Sue stayed so they could aim their ship towards Annihilus' ship, waiting for the exact moment to hurl it towards the insectoid's vessel.

At the exact moment, Sue and Reed finally increased the speed of their ship to maximum levels, before they were able to catch up with Johnny and Ben on the escape pod in time, finally escaping the mothership, seconds only before it ultimately collided with Annihilus' ship, driving it out of the beam, towards the deep abyss. It was that time, the Fantastic Four finally saved the day from unseen but treacherous threats, once again.

Deal With the Mad Titan

However, Annihilus was revealed to have survive the devastating collision of both ships, revealing that his ship had somehow deposited somewhere else, crash-landing towards the rough surface of Titan, one of the known moons of the planet Saturn. Unfortunately, Annihilus was the only individual from his entire crew who was able to survive the rough landing, thanks to his functioning Cosmic Control Rod that he had kept on holding since the ship was heading towards Titan. In the wake of surviving the near-death experience that he'd just encountered, Annihilus was extremely furious for his miserable failure on trying to conquer Earth, making him release a powerful, infuriating shriek into the Titanian atmosphere.

Feud With the Fantastic Four

In the midst of his search for his long lost father in the surface world, the Atlantean lord Namor unexpectedly crossed paths with the heroic explanatory team of cosmic adventurers known as the Fantastic Four for the very first time, who discovered a mysterious interdimensional portal within the core of Atlantis' main domain, on his way to return to Atlantis. This portal would be something that they would later fully discover to be a gate through several dangerous and plain deadly dimensions across the known multiverse, including the shortcuts to the rest of the Seven Seas, although the one Namor was fearing the most was the realm full of lost and terror that was the Negative Zone.

With Atlantis impulsively clashing the Fantastic Four instead of helping them solve the elephant in the room since they first believed that they were a threat, Namor later realized that he and his people were actually fighting against the wrong side, to which in response, he finally convinced his people into joining forces with the surface heroes' cause to prevent the upcoming, larger threat of the Annihilation Wave, as Annihilus attempts to get his massive and ravenous forces through the interdimensional gate and spread their conquest to establish a new territory in the prime reality, starting with planet Earth.

As Annihilus unleashes his hungry forces to raid the Seven Seas, the combined forces of Atlantean warriors and the Fantastic Four counteracted their every deadly and brutal attack, which unfortunately had taken the lives of noble ocean-dwellers who risked their lives for the future of Atlantis. Eventually and thankfully, the chaotic battle for Atlantis has ended with heroic victory, forcing Annihilus and the remainder of his surviving minions to retreat, bidding the Fantastic Four some time to close the Atlantean interdimensional gate, an accomplishment that further enrages Annihilus, fearing that he may never find a way to fester the prime universe ever again.

Agreement with the Black Order

Only a moment after Thanos brutally slaughtered his own traitorous right-hand man, Corvus Glaive during an attempted uprising against his stronghold at the Black Quadrant, he realized that he once gave Glaive the portal device accessing to the Negative Zone even before the events of Infinity War, and at the exact time, a portal suddenly opens in front of his ruined domain, there came the arrival of its long-time ruler, Annihilus, followed by the Annihilation Wave, consisting of the entire ravenous population of the Negative Zone, ready to unleash chaos and destruction on one of their most hated enemies. Weakened but still impressed by what Glaive had done on making an unwilling agreement with Annihilus against the Mad Titan, Thanos smirked before taunting the Annihilus and his entire galactic army, telling them to "bring it on."

Rise of the Cabal

However, just as the Mad Titan was ready to face the forces of the Negative Zone all by himself, another portal opened between the battleground that interrupted the Annihilation Wave from advancing towards Thanos, revealing the arrival of a new team, consisting of somewhat both familiar and unfamiliar faces to Thanos. The team reveals the Black Swan, Maximus the Mad, Namor, Terrax the Tamer, and a few more, introducing themselves as the Cabal. After Thanos agreed to join the Cabal, leaving Annihilus and the Wave still worries him, implying that it would only waste his worthiness of being challenged as one of the most powerful beings in the universe at the very end of it.

Terrax nodded, believing that Thanos might have a point, though Thanos changed his mind by the last second, now offering Annihilus a one last offer, a peace offering, by having him come with the Cabal try and save the universe, and if they failed, he at least gets to die alongside one of his greatest adversaries. Annihilus then agreed, implying why not, it would possibly be the last time they'll be able to have an agreement on. Now joining the rest of the Cabal with Thanos, Annihilus order the entire population of the Wave to return back to the Negative Zone as soon as they possibly could, before the Cabal vanishes as they activated the portal back to the Cabal's headquarters on Earth, which was the abandoned Wakanda city of Necropolis, the former headquarters of the Illuminati.

Upon their arrival on Earth through the portal, the Cabal were a bit surprised to see that Thanos was now holding a mangled and disfigured corpse of Annihilus, and in his defense, Thanos implied that Annihilus was welcomed into coming with them to Necropolis, but not joining the Cabal itself, to which they awkwardly agreed after Thanos added that Annihilus almost killed him several times before, and that he was nothing more than a "squishable bug."

After the awkward situation that was going on, they forgot the murder of Annihilus as didn't even matter at all, before immediately proceeding with their plans on saving and protecting the universe. Later on, Annihilus' scattered rotting corpse was found by Shuri, Okoye and the other members of the Dora Milaje along the burials of the Black Panthers. Finding this body greatly insulted Okoye, Ramonda, and T'Challa, since carelessly putting a villainous foreign being's body was truly unacceptable to the Wakandan lore.

Annihilus possesses a variety of superhuman abilities as a result of prolonged exposure to the Cosmic Control Rod. Due to being subjected to an accelerated-growth element from the work of Doctor Bultar, Annihilus has gained immense power. His might easily rivals Thanos, with the Titan stating that he was evolving into a being apart from the "Cosmic Norm" like that of both Thanos and Adam Warlock. He was stated to have an "Universal" threat level by the Nova Corps, and that if he was to enter the positive universe, he would be categorized only as a "Category 1, Criminal".

Retrieved from "https://marvelcomicsfanon.fandom.com/wiki/Annihilus_(Earth-61615)?oldid=255346"
Community content is available under CC-BY-SA unless otherwise noted.