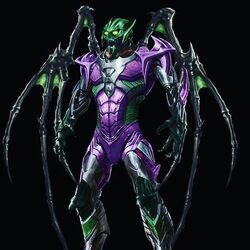 You dare enter the domain of Annihilus?!

Annihilus is a creature of pure avarice and savagery born in the endless realm of the Negative Zone. He grew to rely purely on his instincts, and eventually discovered the ancient artifact called the Cosmic Control Rod.

After coming into possession of the Control Rod, Annihilus gained dominance over the other bug creatures, building a kingdom from nothing but dust and bones. The Negative Zone was eventually discovered by the Earth heroes the Fantastic Four, who Annihilus discovered he enjoyed torturing by using the Cosmic Control Rod to throw their powers out of whack.

From there, he earned himself life long enemies in the Fantastic Four, and it wouldn't be long until he crossed paths with the Avengers too. During a confrontation with the Avengers, the Cosmic Control Rod was destroyed by the combined efforts of Thor, Captain Marvel, and Scarlet Witch.

Enraged, Annihilus felt powerless and began an excavation to recover the Reality Stone. Over time, he came into possession of it and briefly wielded the power of the Infinity Stone before he was tracked down by Hela and the Black Order. During the battle, Hela chopped off Annihilus's wings and the Reality Stone was sucked out by Ebony Maw. They then left Annihilus to fester in his own defeat.

Retrieved from "https://marvelcomicsfanon.fandom.com/wiki/Annihilus_(Earth-101)?oldid=255345"
Community content is available under CC-BY-SA unless otherwise noted.