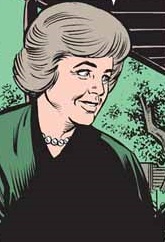 Here's a thought, we set your nephew on a date with my niece.

Anna Watson was the sister of Phillip Watson. She became the legal guardian of his daughters, Gayle and Mary Jane, after he abandoned them. She worked at F.E.A.S.T., where she met her best friend, May Parker

Retrieved from "https://marvelcomicsfanon.fandom.com/wiki/Anna_Watson_(Earth-774237)?oldid=169814"
Community content is available under CC-BY-SA unless otherwise noted.