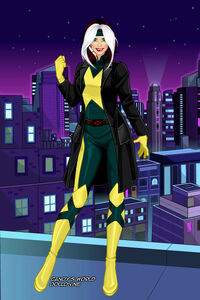 Rogue's life history primarily matches that of her Earth-616 counterpart.

Rogue and Gambit decided to get married at the Institute with Professor X preceding the ceremony. Rogue adopted LeBeau as her surname.

Power Absorption: Can absorb the powers, energies, memories, knowledge, talents, personality and physical abilities (whether superhuman or not) of another human being (or members of some sentient alien races) through physical contact of her skin with the skin of the other person. She is not limited to absorbing superhuman abilities: for example, she has absorbed the strength, agility, and sharp reflexes of an enhanced human. She can also absorb psionic abilities. In absorbing another person’s memories Rogue also gains the emotional responses connected to them. For the transfer of abilities to be accomplished, Rogue’s skin must contact the skin of her victim. Rogue can only absorb abilities and memories from living organic beings. She can possess the powers of several superhuman persons at once. No upper limit has yet been determined for the number of superhuman beings whose power she can maintain simultaneously, or for the amount of power that she can absorb. Rogue can even absorb gross physical characteristics from a victim. Her physical appearance does not change when she absorbs abilities and memories from a normal looking human being. The victim's abilities and memories are absorbed for a time sixty times longer than the period of time Rogue was in physical contact with that person. Those touched are rendered unconscious by contact with her, though some beings, including Juggernaut and Mojo have resisted this effect. While for most of her life, her use of this power was involuntary, Rogue has recently gained full control over it.

Wonder Man's Powers: Currently, Rogue seemingly still retains some of Wonder Man powers & abilities even though he has been released from her body, possibly permanently. Assuming a 1:1 comparison between their two power levels, she must possess the following stats:

Rogue has displayed acrobatic skills she apparently learned from Gambit while they both recovered from fighting Vargas. Rogue can also speak fluent French, and while on an alien world, proved to be an excellent swordsman, having been taught by her brother Nightcrawler. Rogue's skills also depend on who she has recently absorbed. Rogue could formerly draw upon the combat and espionage training of Carol Danvers by granting control of her body to her alternate personality, a duplicate of Danvers'.

Rogue's current strength level is based on the powers she absorbed from Wonder Man. Presuming a direct transfer of power levels, she should have Wonder Man's full Class 100 strength level.

Retrieved from "https://marvelcomicsfanon.fandom.com/wiki/Anna_Marie_LeBeau_(Earth-16160)?oldid=259690"
Community content is available under CC-BY-SA unless otherwise noted.