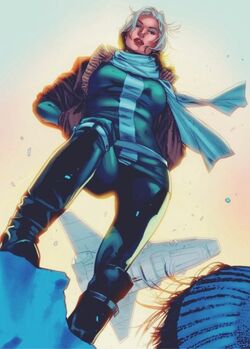 Before the years of Ultron Revolution, Rogue seemed to have the same history with her Earth-61615 counterpart, until the delusional and megalomaniacal machine Ultron started an all-out war against humanity, and extinguished those who dared to oppose him and his ideologies. During the events of Year One of the Ultron Revolution, Rogue willingly helped the rest of the X-Men evacuate the residents of the X-Mansion and safely take them to their refuge in the underground megacity, which was secretly built by Stark Industries, located directly beneath the underground sewers across the city of New York. Having the great loss of her friends and family, in addition to several casualties within the heroic team caused by Ultron and his Sentinels, Rogue was able to absorb all of her fellow teammates' powers out of mercy, right before most of them had exhaled their last breath, much to her major grief and affliction.

During the events of the Ultron Revolution, Rogue became one of the only known mutants to survive the Mutant War against the hunt of the "Ultron Sentinels," Sentinels that were created and activated by Ultron himself, in order to exterminate every mutant they could track down. The effects of the war caused the eventual disbandment of the X-Men, the Brotherhood, and every other mutant organization that ever existed, and also caused the deaths of millions of humans and mutants worldwide after the end of Year Ten and the revolution itself, leading to a sudden outbreak of worldwide mass terrorism acts and violence against mutantkind, with anti-mutants protesters rioting across the streets, believing that they no longer needed the help of their neighboring kind.

Due to this series of unfortunate events, Rogue and the rest of her fellow surviving mutants, led by Logan, who believed in the same cause, tried their absolute best and kept on fighting and surviving against anti-mutant oppressors in order to avoid mutant extinction. At some point when mutantkind was on the brink of extermination from the unstoppable oppression of anti-mutant protestors, Bobby started getting close with Rogue, and he would later fall deeply in love with her. Eventually, the two professed their love to each other, due to their mutual attraction to one another since then.

However, the team had still failed, and without anyone who could help mutantkind from anti-mutant powers, not even the superhumans could have done anything, the survivors had no other choice but to leave their home states and countries all around the world which were run by anti-mutant supporters, and forced to go and live in hiding, hoping for the days that hope would come and save mutantkind, hoping for the days that would never come.

Years after the events of Ultron Revolution, mutants were on the brink of extinction due to the release of the "Legacy Virus," formerly created by the Transigen Project, which was released by Ultron moments before his defeat years ago and it began spreading, poisoning the population of mutantkind. Due to this cataclysmic event, Bobby and Rogue were forced to abandon the ruins of the X-Mansion after the dismantlement of the X-Men, and had no other choice but to rely on each other as they were on their own, only a few months even before the chaotic anarchic nation of the United States decided to force every single mutant out of the country, and seize those who rejected the new law they had cruelly implemented.

Though Bobby didn't reveal to anyone else where they went, Rogue later told Logan that they decided to move to a small, comfortable cabin within the town of Anchorage, Alaska, starting a peaceful life as a couple, for the moment. As a result of these cruel and unethical events, the rest of the mutants slowly retired from their heroic lives and began living outside the United States, hiding from the eyes of the Alkali Corporation, an anti-mutant organization and a subsidiary of H.A.M.M.E.R. that recently surfaced into a recovering society and began hunting, killing, and experimenting on mutantkind for the sole purpose of wiping them from existence. But back in the town of Anchorage, Rogue and Bobby were adjusting to their perfectly normal lives, blending in with their small newfound community.

Unluckily, the couple's situation of hiding had come to an end, when after five straight months of living in peaceful refuge, Rogue was unexpectedly attacked inside their cabin by a group of men, who were eventually discovered to be an anti-mutant militia led by the former leader of the Reavers, Donald Pierce. Infiltrating their cabin, Rogue questioned Pierce on his intentions, to which he responded that his "boss" needed something from her to complete his research on his Weapon XVII program, which clearly required absorbing abilities. Refusing to go with Pierce's crew, the militia immediately responded by opening fire on her, forcing her to unleash her powers for the first time in five years, as she defends herself from the hostile intruders.

Rogue easily held her own against the incoming hostiles, using every power she had obtained from before against them, just as Bobby arrived at the scene to help her, but was unfortunately defeated when she was shot by Pierce's power-dampening bullets, which temporarily depowered her and knocked her out, followed by Bobby getting shot with an advanced version of a taser gun, painfully paralyzing him in a matter of a minute. Rogue was then taken into their truck afterwards, leaving a stunned Bobby alone in the cabin as they went to the headquarters of the Alkali Corporation.

Just as Bobby got himself out of the metallic collars the militia placed him in, he chased down the truck that abducted Rogue, though it seemed like he didn't need to chase it further, after seeing the truck suddenly change direction away from the road due to Rogue swiftly weakening the driver by absorbing most of his life-force, causing the truck to collide with a tree after it went downhill. As Bobby immediately approached the wrecked smoldering vehicle, he found an unconscious Rogue, whom he carefully carries out without hesitation. As he slowly walked away from the hill carrying the woman that he loves, Pierce, who miraculously survived after escaping the vehicle moments before it exploded, mercilessly shot both of Bobby's legs with his power-dampening bullets.

Reunion with an Old Friend

As Pierce prepared to aim the gun and pull the trigger on a powerless Bobby, the villain was abruptly impaled from behind with a wooden stake through his chest, showing that a "complete stranger" just saved the couple's lives, much to Bobby's relief. As Pierce was impaled, the stranger pushes him off, causing Pierce to roll down the hill, seemingly dead. In the next few seconds, Rogue regains consciousness, delighting Bobby. Having no idea on how to thank the mysterious the man who just saved his life, he insisted that they don't need to thank him.

Strangely recognizing the man's voice, the two realized that the stranger was actually the Merc with a Mouth himself, their old friend and ally Wade Wilson, though he was in a standard civilian wearing a red hoodie jacket, instead of wearing his usual Deadpool attire. Questioning why he was at the town around the time, Wade told the couple that the Resistance desperately needed their help one last time back in New York in order to end the tyrannical reign of the Empire once and for all.

After the death of the Punisher, Bobby, Rogue, Wade, and the rest of the remaining mutants were subsequently inspired by his heroic sacrifice, and decided to finally come out in the open, returning back to New York to help the Resistance in battling Edward Stark's tyrannical dictatorship over the world, and decided to finally end it once and for all after five years, which were proven to be successful in the end of their heroic campaign after the Empire collapsed and fell crumbling into the ground.

Along with their grand victory, the Alkali Corporation also fell along with the rest of the Empire's associations, all thanks to Logan's last known act of leadership in leading a mutant resistance against the cruel organization. Despite their additional victor for the future of mutantkind, Rogue and Bobby were puzzled by Logan's sudden disappearance, having little awareness to what he was actually planning on doing next, which was saving his daughter Laura from the clutches of Alkali and Zander Rice.

Five days after the war against the Empire had ended, Rogue and the hopeful mutant resistance assisted the powerful speech held by the new president of the nation, Thunderbolt Ross, who publicly pleaded the innocence of the mutant race in Washington, ultimately convincing the entire nation that mutantkind was never their enemy to begin with, which finally ended most of the anti-mutant-related conflict which has been occurring all over the world, once and for all, giving another glimpse of hope to the rest of mutantkind in starting over again, in an equal and peaceful society. During the nationwide speech, Ross was almost assassinated by the former H.A.M.M.E.R. mercenary and anti-mutant Hitman, but was saved at the last second by Bobby's quick reflexes. Bobby who was also able to subdue Kenyon afterwards, leading to his arrest.

As a consequence of the reality-ending phenomena known as incursions, Rogue's entire universe was on the brink of extinction. As the incursion commenced, Rogue assisted the rest of Earth's heroes in defending the civilians of Manhattan from the incoming threats in the skies above coming from the other Earth, while the others were heavily occupied in assisting the people in entering the fleet of massive spaceships in the intention of evacuating the planet. However, none of their efforts ever prevailed, and in the end, the two realities collided otherwise, and Bobby had no solution but to tearfully kiss and embrace his beloved Rogue, who was fatally wounded, one last time, as they and the rest of Earth's inhabitants left on the planet's surface inevitably died together with their universe.

After the restoration of the Multiverse at the hands of the benevolent Beyonder in order to compensate the disastrous and convoluted Secret Wars, Rogue and Iceman along with the rest of Earth-61616's surviving residents would later resurface in his own native universe in its normal state, which was eventually brought back to existence together with the rest of the Multiverse, most notably after the heroes of the mainstream reality were able to banish Nightmare from this reality, preventing him from taking over Earth-61616 and making it his realm of darkness.

Seemingly those of Anna Marie Carlyle of Earth-61615, in addition to some of the notable superhuman powers and abilities she obtained from the likes of Remy LeBeau, Victor Creed, Cain Marko, Warren Worthington III, Piotr Rasputin, Max Eisenhardt, and several more mutants who've perished during and after the decade of Ultron Revolution.

Seemingly those of Anna Marie Carlyle of Earth-61615.

Seemingly those of Anna Marie Carlyle of Earth-61615.

Retrieved from "https://marvelcomicsfanon.fandom.com/wiki/Anna_Marie_Carlyle_(Earth-61616)?oldid=266544"
Community content is available under CC-BY-SA unless otherwise noted.