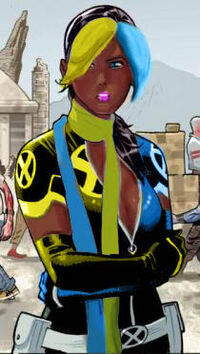 When Anna was young she was born with lightning powers because her mother and father were mutants with powers and they are unknown. Anna had a brother named Casey and they lived and adopted in South Africa with Ororo Munroe (Storm) and her friends. After growing up she's taken to Charles Xavier's school of mutants along with her brother, and she's kind of shy meeting new friends who are mutants and takes long of getting used to. When in the battle with the Sentinels, she's scared and about to die, but she used her lightning powers to destroy one of the Sentinels, and is saved by Storm and the X-Men. Currently, she's being taught and learned how to control and use her powers. She left the X Men and joined the New Mutants.

The mutant sibling relationship dynamic is inspired by Quicksilver and the Scarlet Witch.

Retrieved from "https://marvelcomicsfanon.fandom.com/wiki/Anna_Livingston_(Earth-616)?oldid=188572"
Community content is available under CC-BY-SA unless otherwise noted.