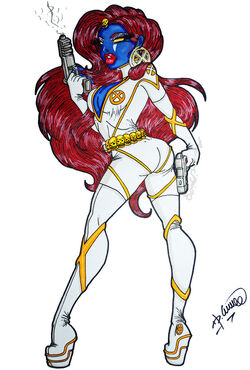 Nothing about "Anna Darkholme" is known for sure. Most people believe that she is actually Mystique under a new identity, with new powers. But she claims to be the daughter of Mystique and Forge. So, here is her life story as she tells it:

Mystery is supposedly the daughter of Mystique and Forge. As a child, she was abandoned by her mother, and Forge took her in for a time. But soon after, when she was about 10 years of age, he died, and she fled into the desert. In the Southwest region of the US, she had very little to do, so she entertained herself by causing trouble for the locals. But soon, she got sick of this, so she decided to flee the area. She made her way to California, and after a short time, she supposedly became a famous actress under the name "Leslie Fianchett." She soon tired of this too, so she hopped a plane to New York.

After she got tired of her two lives, she decided to make a new one. And for some reason, she felt compelled to use her powers for good. So she went to New York and joined the X-Men, who she knew absolutely nothing about. It was later revealed that Psi-Lord reeled her in telepathically. But she was happy that she came, as she enjoyed fighting the Skrulls a bit more than she should have. She got to use her powers in ways she never got to before. Afterwards, she joined the team full-time, though it was hard to fit in, since so many people were skeptical that she was who she claimed to be. But Mystery always loved a good challenge.

Note: Many people still believe that Mystery is actually Mystique, but Psi-Lord claims that her story is legitimate. It will remain to see what Mystery's truth really is.

Shape-Shifting: Anna can shapeshift in many ways: reference the list below:

Advanced Longevity: Anna appears to be 25, but she claims to be 40. It is theorized that she could live for 200 years, but if she truly is Mystique, she would be nearing the end of her life.

Expert Combatant/Weapons Master: Anna has an excellent knowledge of armed and unarmed combat, as well as the functions of machines. She has a few custom guns she made herself.

Skilled Inventor: Thought not quite as good as her "father," the mutant inventor Forge, Anna is an excellent inventor.

Equipment: None known.
Weapons: Anna uses much of her own technology, as well as handguns.

Author's Note: Though it would allow for many interesting stories if Anna was actually Mystique, I originally intended for her to be another actual child of superhero parents. However, I left the door open for whatever possibilities made for the best storylines.

Retrieved from "https://marvelcomicsfanon.fandom.com/wiki/Anna_Darkholme_(Earth-1175)?oldid=228803"
Community content is available under CC-BY-SA unless otherwise noted.