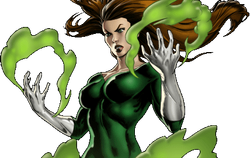 Vapor's history prior to being recruited as a technical specialist for his space mission by Simon Utrecht has yet to be revealed. She, along with her brother James, was among the small group led by Utrecht to simulate the crash that gave the Fantastic Four their powers, and has remained with the U-Foes ever since.

Vapor's body has been bombarded with cosmic rays far greater then that of the Invisible Woman, since then her brother X-Ray has once more bathed her in cosmic rays so as to achieve better control over her gas-like form.

Gaseous Form: Vapor's body is that of living gas(es). She is mostly invulnerable to physical harm, although she can still be harmed by unconventional attacks.

Vapor has the normal human strength of a woman of her age, height, and build who engages in moderate physical exercise in her human form. In her gaseous form she cannot lift anything.

She is vulnerable to any chemical interaction that would affect the chemical-form she is currently in.

Retrieved from "https://marvelcomicsfanon.fandom.com/wiki/Ann_Darnell_(Earth-1010)?oldid=255083"
Community content is available under CC-BY-SA unless otherwise noted.