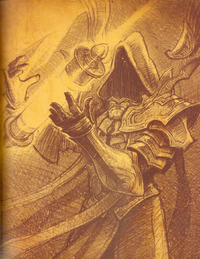 The angels are extra-dimensional race of cosmoslogical inhabitants of Heaven, created by God, the embodiment of Creation in the universe. As the messengers of God, the angels protected Harmony, the embodoiment of Goodness against the Eris, the embodiment of discord and chaos. They are the many figures that's mentioned in religions such as Christianity within the sacred texts of the Bible. They're capabilities as angels surpasses most cosmic entities in the universe, including rivalling the likes Galactus and even Eternity.

The angels appeared to have a similar physiology with humans with a selected exception (such as certain Seraphs such as the Twelve Archangels). Most angels are spiritual in nature, with seraphs being ethereal beings (meaning they're closer to being an concept or abstract idea then spiritual). However, it is due to this angels rarely manifest into the physical plane but that of the higher echelon of angels.

While angels are depicted in most religions, being a huma being with white avian wings on their backs (depending on the class of angel, one may posess 2-6 wings). However, this is disregarded as angels are actually shown in a heavy suit of armour of unknown materials. "Vessels" they are called, allows the angels to enter the physical plane, but can still these vessels in the spiritual planes such as Heaven. Each angel is somewhat unique in shape and design, having different armour traits. The armour also corrosponds to the particular rank the angel is in. While they're immortal beings, requiring no sleep, food, water, rest and never tire, they can infact consume food. Like humans, each angel as their own preferences on what they want to eat and drink. They also do not possess any of the bodily functions of an human, they can still produce tears to represent saddness. Likewise, they are utterly immune to any diseas, toxins and viruses.

While their "anatomy" is purely spiritual and conceptualized, angel possess some form of functions, as they possess a type of substance known as "liquid light". In human terms, these liquid light be the life-force of an angel, to which they can die if they "bleed to much". Angels usually is able to regenerate rather quickly from wounds, some weapons can in fact harm a angel and nullify their regenerative capabilities. They also possess a type of "heart" in human terms, to which there are two. These functions are yet unclear.

100+: Most, if not all angels possess strength levels beyond what a human could even comprehend.

Retrieved from "https://marvelcomicsfanon.fandom.com/wiki/Angels_(Earth-888)?oldid=218641"
Community content is available under CC-BY-SA unless otherwise noted.