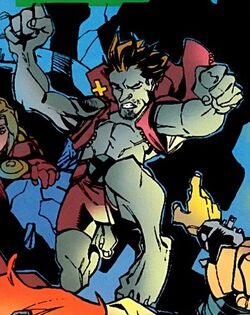 Relax, amigo. I'm not a mutant. I was bitten by a radioactive elephant, which gave me grey skin and stretching powers.

Born in the barrio of Los Angeles, Angelo had an overbearing mother, who begged him never to join a gang. He complied, and did his best to simply blend in to the LA scene. Unfortunately, that led to him joining a gang alongside his girlfriend Tores . It became increasingly difficult for Angelo to hide this from his mother, but (un)fortunately, Angelo and Tores were caught in a drive-by. During this, Angelo's powers manifested, lodging the bullets in his skin. A fiery crash ensued, and when Angelo woke up, his loosening skin had smothered the flames. But as he retracted it, the fire spread to him and the only other surviving gang member. When he tried to make a move, the car exploded, killing him. Angelo soon fled, and since he'd lose his wallet near the body, he was declared legally dead.

A few months after becoming an aimless drifter, he found his city under attack by Ultron and his team of enforcers Heavy Metal. Seeing that no one was challenging the team, he scared a costume shop owner away and cobbled together an outfit. He was brave enough to directly engage Ultron in combat as Elephant Steve, even when the West Coast Avengers arrived. He directed them towards Heavy Metal while he kept Ultron restrained. Even though he was badly injured, and Ultron nearly exposed his cover, he continued to fight. Eventually, Heavy Metal was defeated and Ultron escaped. The Avengers took him in to tend to his injuries, but Angelo managed to escape Avengers HQ before they could determine his identity.

Extended Dermis: Angelo's mutation grants him six to ten feet of extra skin covering his body. He is capable of manipulating this extra skin in any way possible, like stretching or bending it beyond typical human limits, for example.

Angelo was fluent in both English and Spanish.

Retrieved from "https://marvelcomicsfanon.fandom.com/wiki/Angelo_Espinosa_(Earth-166)?oldid=173603"
Community content is available under CC-BY-SA unless otherwise noted.